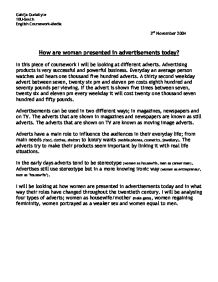 How are woman presented in advertisements today?

3rd November 2004 How are woman presented in advertisements today? In this piece of coursework I will be looking at different adverts. Advertising products is very successful and powerful business. Everyday an average person watches and hears one thousand five hundred adverts. A thirty second weekday advert between seven, twenty six pm and eleven pm costs eighth hundred and seventy pounds per viewing. If the advert is shown five times between seven, twenty six and eleven pm every weekday it will cost twenty one thousand seven hundred and fifty pounds. Advertisements can be used in two different ways; in magazines, newspapers and on TV. The adverts that are shown in magazines and newspapers are known as still adverts. The adverts that are shown on TV are known as moving image adverts. Adverts have a main role to influence the audiences in their everyday life; from main needs (food, clothes, shelter) to luxury wants (mobile phones, cosmetics, jewellery). The adverts try to make their products seem important by linking it with real life situations. In the early days adverts tend to be stereotype (women as housewife, men as career man). Advertises still use stereotype but in a more knowing ironic way (women as entrepreneur, men as 'housewife'). ...read more.

The main character is a brunette woman. This advert associates with upper class people because it shows elegance and luxury. This advert meant to appeal to elegant women's who would like to wash themselves with pink CAMAY soap. By the late 70's to early 80's men and women were used to advertise together. Women were portrayed as weaker s*x. Women back then were not happy to be weaker s*x than men. This is portrayed by the prudential company's advert which I will be analysing. At the beginning of this advert camera creates the image from the long distance shot. The advert uses really bright colours suitable to the late 70's fashion. The man is wearing really bright coloured clothes (suitable to the fashion) however the lady wears old fashion clothes. The man starts of the dialogue. Man says: We want to be able to live a little. (Looks at her husband in negative facial expression) Women voice over: I want to be able to live a lot. Man says: We want to be able to go out once in a while. (Women's face drops) Women voice over: I want to be out every night. Man says: We want to enjoy the garden. (Looks away from her husband) ...read more.

Women were portrayed as a weaker s*x. In the 1980's women were used to sell negative products. Later on they began to be presented as man's equal. By the end of the 1980's there was introduction of 'female gaze'. My thoughts and feelings about women in advertising are quite strong. I disagree with male gaze because I wouldn't like myself to be at home and do all the house works while my husband is at work. I think that women don't have to ask their husband for money to go out and buy food or clothes. I also disagree with female gaze because that wouldn't be fair on men's. Men's don't have to do everything women say to them. They don't have to stay at home and do all the house works or look after their children. So I think it is right for women to be presented as men's equal. I think man and women need to be treated equally because this way there is no male gaze or female gaze. I predict that in the future women will be advertised in more passionate way. I think in future women will be advertising everything from main needs to luxury wants using their s****l figures. I also believe that women will take the control over the advertising business by selling their bodies to the companies that advertises products. Gabija Gudaityte 10U-South English Coursework-Media ...read more.