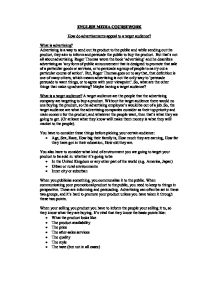 How do advertisements appeal to a target audience?

ENGLISH MEDIA COURSEWORK How do advertisements appeal to a target audience? What is advertising? Advertising is a way to send out its product to the public and while sending out the product, they aim to inform and persuade the public to buy the product. But that's not all about advertising. Roger Thomas wrote the book 'advertising' and he describes advertising as 'any form of public announcement that is designed to promote that sale of a particular goods or services, or to persuade a group of people to carry out a particular course of action'. But, Roger Thomas goes on to say that, that definition is one of many others, which means advertising is not the only way to 'persuade persuade to want things, or to agree with your viewpoint'. So, what are the other things that make up advertising? Maybe having a target audience? What is a target audience? A target audience are the people that the advertising company are targeting to buy a product. Without the target audience there would no one buying the product, so the advertising employee's would be out of a job. So, the target audience are what the advertising companies consider as their top priority and main concern for the product, and whatever the people want, then that's what they are going to get. (Or at least what they know will make them money is what they will market to the people). You have to consider these things before picking your certain audience: * Age, s*x, Race, How big their family is, How much they are earning, How far they have got in their education, How old they are. You also have to consider what kind of environment you are going to target your product to be sold in. whether it's going to be * In the United Kingdom or any other part of the world (e.g. America, Japan) ...read more.

There is no brand name, because there is no actual product, but the name of the company is World Vision. The slogan that I heard them say at the end was 'Choose to change a child's life' which I think relates to the image because the children's lives don't mean anything to them. They have no chance to experience love, so we could change that. The words 'Choose' in the slogan patronizes us saying that we can either be selfish or caring. And that all the child's solutions lie in our hands, and out of our pockets. In the background of the advert, there was backing music. The music was slow and swift. It was the kind of music that makes you think, if you had to be silent for Remembrance Day. There was also a person speaking over the swift music, and there was text on the page in which was disappearing whilst one was appearing. The music would not appeal to the younger generation because it's not very beaty, or lively, so they would probably overlook the adverts. There's a female voice over the top, a I think it's good that they used her voice because it matched the kind of music they played, and the pace she spoke at matched the pace of the music. Being female also shows vulnerability. She spoke in formal language, mainly because they are targeting an older target audience, and not a younger one because they're not likely to spend the little pocket money on something that doesn't affect them directly. On the children's faces, you could see that they've all been through similar experiences, and that is why they used those children in the adverts. The advert does have a story, but it hasn't come to ending part yet it seems. I think in the end though they will find happiness, and someone out there will open their purse or wallet, and bring out a fat cheque, that's able to help many people. ...read more.

One ad is about showing off a product of clothing with bright, bold, fiery colours, and the girl looking great and smiling saying 'life is good when you're wearing the right clothes'. But the other one is about the suffering of the children in 3rd world countries with no food, especially no clothes to wear, and no proper shelter. Conclusion I enjoyed making the advert, but you have to understand how much work goes into it. If I hadn't done the work in the beginning, I wouldn't have come up with something as good as I have here. What I did I guess was a mini version of what the real advertising employees do, but even so, I thought doing the project was a great way, and introduction on the background that people are paid to do, and what come up on our televisions. The bit I found the hardest was coming up with a brand name because that was the start to drawing my advert besides the target audience, social class, and s*x. Our found out that making a product for men was a lot harder than making a product for women. We chose to work with women was a lot harder to work with. Also we had more experience in what women look for in clothes seeing as though we were females ourselves. It was an experience working with different people in a group, and because we were able to get along, we had no problems communicating. My favourite part out of the whole project was to make the advert, and me having the role of colouring the whole thing in. our group had no problem with the advert, because we knew what we were doing and how we were going to go about doing it. The bit I didn't like after the whole thing was having to write up everything we did afterwards. This slowed down my creative spirit. In conclusion, the majority of the time I spent on this project was well spent, and well enjoyed. ...read more.