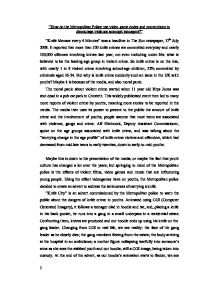 &quot;How do the Metropolitan Police use video game codes and conventions to discourage violence amongst teenagers?&quot;

"How do the Metropolitan Police use video game codes and conventions to discourage violence amongst teenagers?" "Knife Menace every 4 Minutes" was a headline in The Sun newspaper, 17th July 2008. It reported that more than 350 knife crimes are committed everyday and nearly 130,000 offences involving knives last year, not even including under-16s: what is believed to be the leading age group in violent crime. So knife crime is on the rise, with nearly 1 in 8 violent crime involving school-age children, 52% committed by criminals aged 16-24. But why is knife crime suddenly such an issue in the UK with youths? Maybe it is because of the media, and also moral panic. The moral panic about violent crime started when 11 year old Rhys Jones was shot dead in a pub car park in Croxteth. This widely publicized event then led to many more reports of violent crime by youths, meaning more stories to be reported in the media. The media then uses its power to present to the public the amount of knife crime and the involvement of youths; people assume that most teens are associated with violence, gangs and crime. Alf Hitchcock, Deputy Assistant Commissioner, spoke on the age groups associated with knife crime, and was talking about the "worrying change in the age profile" of knife crime victims and offenders, which had decreased from mid-late teens to early twenties, down to early-to-mid-youths. ...read more.

This is a good camera angle to use after a stabbing as it truly connects with the victim and the fear and consequences that comes with carrying a knife. The camera movement realistically represents a computer game. When the character is first introduced, they use pans, just like on GTA and WoW. This is used to make us feel like we are surrounding the character, as if we are truly in the game. This is a good way to introduce the character as using a pan from a low angle lets us know that this is the character we will be controlling. Also when the youth is running down the street the camera follows the movements of the boy exactly. This makes it feel realistically like a video game because it feels as if we are that character, and are experiencing it exactly as the character does. This is used a lot in video games, and watching the GTA advert, they also use a lot of crane shots to follow the characters too. The setting of the crime and of the area that the youth lives in is quite significant, as is the mise en scene. The first setting image we see is of a square of greenery in the centre of an urban city, with tall buildings as a backdrop. The urban cityscape is used to appeal to the target audience, as it is a typical stereotype of where stabbings and gang violence occur. ...read more.

This really destabilises the distinction between reality and fantasy, as when the youth stabs the gang leader, both the health bar and weapon symbols disappear. Using this really makes the audience feel that it has changed from fantasy to reality, and is a great way to destabilise as the audience will understand the difference between the video game and real life. Overall, I think that using a videogame style in "Knife City" was a success, as it is quite effective; using video game codes and styles really connects with the target audience, and I feel that youths watching would really understand and acknowledge the fact that carrying a knife is not just a game. I agree with the whole principle of "Knife City" as it seems like a perfect way to relate to teens and youths who are associated with knife crime to understand the seriousness of carrying a knife. I believe that watching this advert would really get the message out there as it is a clever way to connect with the audience. Unfortunately the "Knife City" advert was only aired on 4 channels, which were also only on digital or subscriber channels, not on terrestrial, meaning only a handful of people may have seen the advert. I myself did not see the advert until researching it, so I think they could have tackled the issue of knife crime more effectively; the Metropolitan Police should have broadcast it on terrestrial channels as well as on subscriber and digital channels. 1 ...read more.