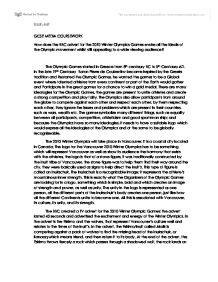 The Olympic Games started in Greece from 8th centaury BC to 5th Centaury AD. In the late 19th Centaury  Baron Pierre de Coubertinv became inspired by the Greeks tradition and Restarted the Olympic Games, he wanted the games to be a Global event where talented athletes from every continent or part of the Earth would gather and Participate in the great games for a chance to win a gold medal. There are many ideologies for the Olympic Games, the games are present to unite athletes and create a strong competition and play fairly. The Olympics also allow participants from around the globe to compete against each other and respect each other, by them respecting each other, they ignore the issues and problems which are present in their countries, such as wars, wealth etc. The games symbolize many different things, such as equality between all participants, competition, athleticism and good sportsman ship; and because the Olympics have so many ideologies, it needs to have a suitable logo which would express all the ideologies of the Olympics and at the same to be globally recogniseable.

The 2010 Winter Olympics will take place in Vancouver, it is a coastal city located in Canada. The logo for the Vancouver 2010 Winter Olympics has to be something which will represent Vancouver as well as show its audience the harmony that exists with the athletes, the logo is that of a stone figure, it was traditionally constructed by the Inuit tribe of Vancouver, the stone figure was to help them find their way around the city, they were basically used as signs to help direct the Inuit’s. This type of figure is called an Inukschuk. The Inukschuk is a recognizable image; it represents the athlete’s mountainous inner strength. This is exactly what the Organizers of the Olympic Games are looking for in a logo, something which is simple, bold and which creates an image of strength and power, as well as unity. The unity in the logo is represented as one person, all the different parts of the Inukschuk’s body creates one person, just like how all the different Continents unite to become one. All this is associated with Vancouver, its culture, its unity, and its strength.

The BBC created a TV advert for the 2010 Winter Olympic Games; the advert lasted 43 seconds and advertised the excitement and energy of the Winter Olympics. In the advert is the Eskimo and the wolves, that represent Vancouver’s culture well and relates to the times of the Inuit’s. In the advert, the Eskimo/Inuit called Akaik is competing against a pack of wolves to find the missing head of the Inukschuk, or Ilanaaq which means friend, and then return it to its body. At the end of the advert, the Eskimo throws fiercely a rock which passes through a shadowed wolf, the rock lands on a stoned, headless figure, and completes the Inukschuk. The idea of the strong and athletic Eskimo competing against a pack of wolves can be associated with a gold medalist who is competing against fierce and competitive athletes. The Eskimo performing a perfect shot towards the unfinished Inukschuk represents the great talent and strength which athletes have and are capable of. The animator of the advert was a famous animator, Marc Craste, he is a multi-award winning director/animator.

The advertisement symbolizes many different things associated with the Olympics and Vancouver. In the Advertisement, a classical black and white colored theme makes the advert seem ancient and simple. In the background, there is an absence of a narrator speaking over the advert, but to replace this there is a classical song, which has now been remade by Michael Bubble and has been used. Because of the music replacing the narrator, makes the advertisement more appropriate for a global audience. The characters used symbolize the culture within Vancouver, the symbolic characters used in the advert is the Eskimo and the pack of wolves. The Eskimo is associated with a very talented athlete who is aiming for a gold medal, in the advert the Eskimo performed a perfect aim at the unfinished Inukschuk which for him was worth a gold medal, against the Eskimo were the pack of viscous wolves, the wolves were associated with the very competitive athletes who are all aiming to claim the great award. The characters involved in the advert symbolize strength and determination from the participants in the game as well as the competition and tension which is created within the Games. Overall the advert is completely suitable for its purpose which is to advertise as many people possible about the great Olympic Games which are held In Vancouver, at the same time it advertise the culture and associate everything in the TV advertisement with Vancouver itself, and its entertaining, exciting and advertising at the same time.

In the 43 second advert, technical devices are used to complete the advert. During the advert, the sky is made to reflect the colours of the Olympic rings. Also, the way the colour scheme is mono-chrome; this is a basic colour scheme and allows the advert to look much older. The format of the advert is an animation; this is overall much more cheaper to produce than filming an actor being chased by wolves, and filming someone making an almost impossible throw, the disadvantage of the advert being an animation is that the production of the animation takes a lot of time and effort. Besides this there are many other advantages of using animation over a live film, most of these advantages is by how much easier it is to produce better views of the animation, than it would be to get different views of the advert by using live film. For example, it is much easier to take a close up on an animation than it is on a live film, and this applies with long shots too, and panning and zooming in the advert, is much easier. Because the advert is animation, it makes the widens the range of the target audience too, making it appropriate for children as well as adults, and is much more suitable for advertising the Olympic games because it advertises and at the same time reduces the time taken for the advert to be produced especially because it saves for the editors to search for different clips of the winter Olympics.

Personally this advert would have been one of my favorite adverts for any Olympic games, mainly because of the culture, history and relevance and has been combined and placed in one advert, it also targets most audiences, it had a positive impact on me because of how the producers highlighted key items during the advert, such as the Olympic Rings, the Inukschuk and the Eskimo. It also had an impact of my views of the Olympic Games because it creates an atmosphere of excitement and competition. The only negative feature I can comment on is how it highlights that a man has achieved the goal, if the advert was meant to express equality a woman should ideally be competing or achieving something.