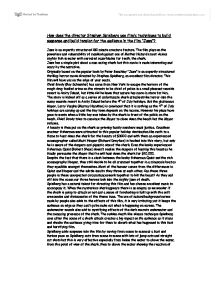 How does the director Stephen Spielberg use filmic techniques to build suspense and build tension for the audience in the film Jaws?

How does the director Stephen Spielberg use filmic techniques to build suspense and build tension for the audience in the film "Jaws"? Jaws is an expertly structured 180 minute creature feature. The film plays on the powerless and vulnerability of mankind against one of Mother Nature's most vicious mighty fish in water with serrated razorblades for teeth, the shark. Jaws has a simple plot about a man eating shark but this movie is made interesting and scary by the narrative. Originally based on the popular book by Peter Benchley "Jaws" is an expertly structured thrilling horror movie directed by Stephen Spielberg, an excellent film director. This film will have you on the edge of your seats. Chief Brody (Roy Schneider) has come from New York to escape the horrors of the rough drug fuelled crime on the streets to be chief of police in a small pleasant seaside resort in Amity Island, but little did he know that nature has more in store for him. The story is kicked off as a series of unfortunate shark attacks strike terror into the sunny seaside resort in Amity Island before the 4th of July holidays. But the gluttonous Mayor, Larry Vaughn (Murray Hamilton) is convinced that it is nothing as the 4th of July holidays are coming up and the tiny town depends on the income. However his plans have gone to waste when a little boy was taken by the shark in front of the public on the beach. ...read more.

There are also scenes that keep the audience biting their nails because Spielberg makes fake alerts and real shark attacks seem unnerving and the fact that not a lot of people die in this movie makes it more terrifying to the audience as each character that gets killed by the shark will have more of an impact. There is so much suspense created on the beach scene of the false shark attack because of the confusion and chaos, while all this is happening the audience will be wondering is anyone going to get killed by the shark? So they don't notice that there is no theme tune of the shark and while their attention is diverted the real shark is swimming away towards Chief Brodys son. Suspense is created as the audience wonders when people are coming to get help to save the boys, and will Brodys son live or die? The theme tune also builds up suspense as it gets faster and faster and crescendos, the audience can feel the urgency and the speed of the shark as it comes closer and closer. More tension is created as the shark comes up behind a man in a tiny boat but the man doesn't hear the girl yell "Shark" so he is blissfully unaware until the shark starts attacking his tiny boat. Spielberg makes each attack seem more scary and alarming for the audience because he makes the audience care about the characters in the film. ...read more.

Spielberg lets Quint die in the story to create suspense as there is only Brody left on the boat by himself; Brody is seen as helpless and doesn't know what to do so the only thing he brought with him was a gun. The sudden disappearance of Hooper also creates suspense and tension for the audience because they don't know it he is alive or dead and how is he going to help Brody kill the shark? When the shark races towards Brody we can hear him praying to god before he's about to shoot the shark, this is a great suspense tactic because this is his only chance and if he misses the shark then he will be most likely to die. The audiences' reaction would be wondering if he's going to live or die as the tension here is so big. But the tension is soon relieved because of the fast pace of the film and the shark explodes leaving everything red, gory and blood spattered. Then the music changed to a happy one as we see Hooper emerge from the water unharmed, together him and Brody swim home on a piece of drift wood. This film will have your hair standing on end with the brilliant suspense tactics that Spielberg uses. The camera angles are skilled and very well thought out, the film creates a brand new level of fear towards the shark. The music is very dark and ominous our fear grows bigger with each crescendo. ...read more.