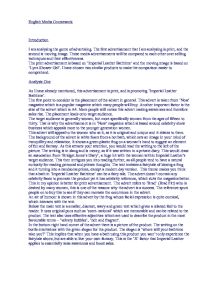 English Media Coursework Introduction I am analysing the genre of advertising. The first advertisement that I am analysing is print, and the second is moving image. These media advertisements will be compared to each other over selling techniques and their effectiveness. The print advertisement is based on 'Imperial Leather Bathtime' and the moving image is based on 'Lynx Shower Gel'. I have chosen two similar products to make the comparison easier to comprehend. Analysis One As I have already mentioned, this advertisement is print, and is promoting 'Imperial Leather Bathtime'. The first point to consider is the placement of the advert in general. This advert is taken from 'Now' magazine which is a popular magazine which many people will buy. Another important factor is the size of the advert which is A4. More people will notice this advert making awareness and therefore sales rise. The placement leads onto target audience. The target audience is generally women, but more specifically women from the ages of fifteen to thirty. That is why the advertisement is in 'Now' magazine which is based around celebrity show business which appeals more to the younger generation women. This advert will appeal to the women who se it, as it is original and unique and it relates to them. The background of the advert is white foam from a hot bath, which sets an image in your mind of tranquillity and relaxation. ...read more.

This is the 'X' factor that Imperial Leather applies to essentially raise awareness and boost sales. Analysis Two My chosen moving image example is 'Lynx Shower Gel'. This advert was taken from ITV at seven thirty p.m. on a Saturday evening. This is prime time television when a young generation of people would be watching. The programme which was being seen was 'Pop Stars - the rivals', which is very popular. The advertisement was strategically placed to raise sales. The target audience of this advert is younger generation males. This was made obvious by the story behind the advert. The advert shows a young man showering with Lynx and preparing to go out. This immediately draws the attention of young men as this specifically relates to them. It then shows the man with his arm around a woman sitting at the top of a hill. When he says to her -'it's a beautiful night isn't it', she replies 'yes'. This is then followed by another girl saying 'yes' and then subsequently followed by a chain of girls with the same reply. This appeals to the younger male generation as it is a common desire. This is Lynx's version of the 'X' factor. It is saying to men, use this shower gel and become irresistible to women. This advert is very short but effective. ...read more.

Both adverts have an element of comedy to attract attention but yet again I feel that 'Imperial Leather' have used this technique to its full potential. The reason for this is that the comedy in 'Imperial Leather' relates souly to their target audience (predominantly women). Whereas the comedy in the 'Lynx' advert is more general, and can relate to more people than their target audience, but this isn't entirely a bad thing. Some viewer's awareness could be raised without their realisation. I think the main difference between the two adverts is that all the properties that create a good one are more specific to the target audience in 'Imperial Leather' and are more general in the 'Lynx' advert. Conclusion In conclusion the 'Imperial Leather Bathtime' advertisement is the more effective and uses techniques to their full potential to raise sales. The only possible improvement that could be made is that the text in the corner of the page could be made bigger and bolder so that is more obvious to the reader. The techniques used in the 'Lynx' advertisement could be improved by going into more detail about the product and to cater for the needs of their viewer. The most important would be to make the advert more specific to the audience i.e. make the comedy relate solely to their target and place it in a time slot when only their target audience would be viewing. It could also use a catchy slogan to make the product as memorable as the advert itself. ...read more.