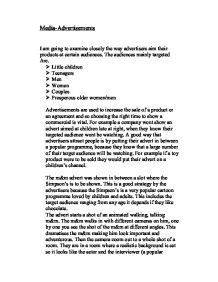 I am going to examine closely the way advertisers aim their products at certain audiences.

Media-Advertisements I am going to examine closely the way advertisers aim their products at certain audiences. The audiences mainly targeted Are. > Little children > Teenagers > Men > Women > Couples > Prosperous older women/men Advertisements are used to increase the sale of a product or an agreement and so choosing the right time to show a commercial is vital. For example a company wont show an advert aimed at children late at right, when they know their targeted audience wont be watching. A good way that advertisers attract people is by putting their advert in between a popular programme, because they know that a large number of their target audience will be watching. For example if a toy product were to be sold they would put their advert on a children's channel. ...read more.

They use a popular person as the interviewer to gain trust of the audience that m&m are good. A shot is placed of the interviewer with a pleasant face, which makes the audience feel secure. They are both on a stage, preparing for an interview. All through the advert there are people constantly moving about, giving the viewer the impression of what happens on, on a fake set. Also it makes the viewer feel more involved in the advert, as if they were there watching the stage. While this is happening the camera is fixed in the direction of the main characters, with blurred figures of the stagehands walking past the cameras view. This is just a small sample of the m&m advert but already they show the product, make it interesting and adventurous, use a fictional ...read more.

Behind the charcter is a giant screen also advertising the function. The lyrics and the beat is very memorable and hard to forget, which shows that the producer has thought hard about it. The two advert are aimed at different audiences, but use similar tactics to entice the viewers into buying their product. We are a nation of television viewers and so therefore a captive audience for advertises. So such things like fast camera shots to advanced image enhancements to defy the laws of physics are applauded. If we like an advert, and we need to buy such things, then we are most likey to buy the product advertisers because it has left a good impression on us. As long as commercials are straight foprward, amusing and put over the product in an interesting way, they are a powerful source of informing the public and potentially selling the product. ...read more.