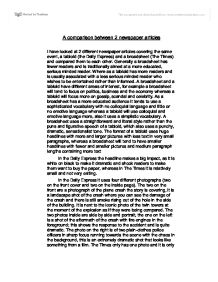 I have looked at 2 different newspaper articles covering the same event, a tabloid (the Daily Express) and a broadsheet (The Times) and compared them to each other.

A comparison between 2 newspaper articles I have looked at 2 different newspaper articles covering the same event, a tabloid (the Daily Express) and a broadsheet (The Times) and compared them to each other. Generally a broadsheet has fewer readers and is traditionally aimed at a more educated, serious minded reader. Where as a tabloid has more readers and is usually associated with a less serious minded reader who wishes to be entertained rather than informed. A broadsheet and a tabloid have different areas of interest, for example a broadsheet will tend to focus on politics, business and the economy whereas a tabloid will focus more on gossip, scandal and celebrity. As a broadsheet has a more educated audience it tends to use a sophisticated vocabulary with no colloquial language and little or no emotive language whereas a tabloid will use colloquial and emotive language more, also it uses a simplistic vocabulary. ...read more.

It is next to the iconic photo of the twin towers at the moment of the explosion as if they were being compared. The two photos inside are side by side and portrait, the one on the left is a shot of the aftermath of the crash with fire engines in the foreground; this shows the response to the accident and is quite dramatic. The photo on the right is of two plain-clothes police officers in sharp focus running towards the scene with the chaos in the background, this is an extremely dramatic shot that looks like something from a film. The Times only has one photo and it is only about a quarter of the page and is of the tower after the plane hit, your eye is drawn towards the hole in the building after the plane hit and there is smoke rising out of it. ...read more.

" 'My God, it's like New York all over again,' one bystander said as passers-by covered in blood after being hit by the falling debris were taken to ambulances." This is typical of a broadsheet newspaper, as they usually get straight to the point without anything else. The Daily Express uses generally a more colloquial, dramatic and emotive language throughout the article as it uses words such as 'smashed, tragedy, chilling memories, billowed, ploughed into and explosions shook the building' to make the story seem more exciting and dramatic, also it uses more quotes and first-person accounts with three in the article rather than The Times which uses only one. In conclusion I think that the articles fit into their stereotype quite well, as The Times used a more formal sophisticated tone with fewer and smaller pictures whereas the Daily Express was a typical tabloid with lots of large pictures and it was more entertaining to read. ...read more.