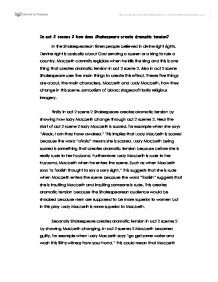 In act 2 scenes 2 how does Shakespeare create dramatic tension?

Ha! They pluck out mine eyes." I infer from this that Macbeth goes mad because he wants to pull his eyes out and this is unordinary. This creates tension because the audience will be happy that Macbeth is feeling guilty and going mad because it is like a punishment from God furthermore the audience believe that Macbeth should get punished. They believe that Macbeth should get punished because he went against divine right and that is going against God, in the Shakespearean times people were really religious. Another way Shakespeare creates dramatic tension is by using symbolism of blood and what owls represent in those times. In the Shakespearean times people believed that owls were signals for death, for example when Lady Macbeth says, "It was owl that shrieks' the fatal bellman, which gives the strernist good-night." This implies that owls were signals for death because the words "fatal bellman" means signals death and Lady Macbeth is talking about owls. This creates dramatic tensions because the audience know what owls represent and plus Macbeths hands were covered in blood and this suggests that he killed King Duncan. ...read more.

Furthermore Shakespeare uses religious imagery to create dramatic tension. In act 2 scene 2 Macbeth has gone against his religion and God also has disrupted natural order for example when Macbeth says "I have done the deed." This suggests that Macbeth has gone against God because the deed that he did was killing King Duncan. This creates dramatic tension because in the Shakespearean times there was something that audience believed in and that was the divine right. The audience would be shocked that he went against the religious belief. In act 2 scene 2 Shakespeare uses five things create dramatic tension. These five things are the main characters, Macbeth and Lady Macbeth and how they change, symbolism of blood and owls, stagecraft and lastly religious imagery. This play is relevant to the modern world because like in the play, modern people want power. In the Shakespearian times men were more superior to women but now it is different, women have the same rights as men. Lastly not everyone believes in the divine right and they have different religions. ?? ?? ?? ?? ...read more.