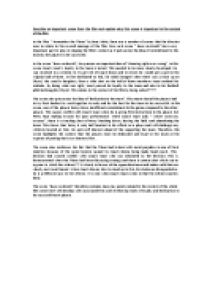 In the film Remember the Titans by Boaz Yakin, there are a number of scenes that the director uses to relate to the overall message of the film

﻿Describe an important scene from the film and explain why this scene is important to the context of the film In the film ? Remember the Titans? by Boaz Yakin, there are a number of scenes that the director uses to relate to the overall message of the film. One such scene ? leave no doubt? has a very important part to play in shaping the film?s context as it puts across the idea of commitment to the team by the players to be successful. In the scene ?leave no doubt?, it expresses an important idea of ?choosing right over wrong?. In this scene Coach Yoast?s loyalty to the team is tested. ...read more.

This relates to the context of the film by being united????? The scene also puts across the idea of ?dedication to the team?. This meant that all the players had to try their hardest to work together in unity and do the best for the team to be successful. In this scene, one of the players Petey shows insufficient commitment to the game compared to the other players. This causes conflict with Coach Yoast when he is giving firm instructions to the players but Petey kept making excuses for poor performance. When Coach Yoast said, ? I don?t want any excuses?, there is a tracking shot of Petey breaking down, leaving the field. ...read more.

This decision had caused conflict with Coach Yoast who was infuriated by the decision. This is demonstrated when the Titans had been discussing strategy and there is camera shot which cuts to a game in which the referee??? is clearly in favour of the opposition team and makes calls that are clearly racist and biased. When Coach Boone tries to stand up to this, his claims are disregarded as he is a different race to the referee. It is only when Coach Yoast comes in that the referee coaches fairly. The scene ?leave no doubt? therefore contains many key points related to the context of the whole film concerned with dealing with racial problems and reinforcing traits of loyalty and dedication to be successful team players. ...read more.