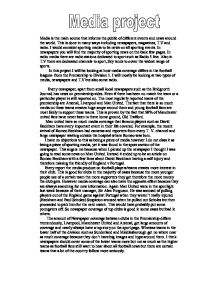 In this project I will be looking at how media coverage differs in the football leagues- from the Premiership to Division 1. I will mostly be looking at two types of media, newspapers and T.V but also some radio.

Media is the main source that informs the public of different events and news around the world. This is done in many ways including newspapers, magazines, T.V and radio. I would consider sporting media to be news on all sporting events. In newspapers you will find the majority of sporting news on the back few pages. In radio media there are radio stations dedicated to sport such as Radio 5 live. Also in T.V there are dedicated channels to sport, Sky tends to cover the widest range of sports. In this project I will be looking at how media coverage differs in the football leagues- from the Premiership to Division 1. I will mostly be looking at two types of media, newspapers and T.V but also some radio. Every newspaper, apart from small local newspapers such as the Bridgnorth Journal, has news on premiership sides. Even if there has been no match the team or a particular player is still reported on. The most regularly reported teams of the premiership are Arsenal, Liverpool and Man United. The fact that there is so much media on these teams creates huge scope around them and young football fans are most likely to support these teams. This is proven by the fact that 98% of Manchester united fans have never been to there home ground, Old Trafford. ...read more.

I think this is wrong because people don't want to pay to watch the T.V. but at least it gives people the opportunity to watch all the football games. Sky has bought the rights to show Division 1 football, I think this is really good because there are many Division 1 fans that can't get to the game but now they can watch them. I think its is good for the higher teams in the division because it raises the profile of the club, and also for the smaller club in the division to get noticed and make a name for themselves. Before you could only watch Division 1 football on, 'On digital'. However the channel went bust but because there was such high demand for division 1 football Sky bought the rights. However the Premiership sides still get the priority of T.V time over division 1. I understand this because there is more interest in Premiership sides. I also agree because if there was a match between Man-United v Liverpool or Nottingham Forest v Watford more people would be disappointed if the division 1 match was shown rather than the Premiership match. Some of the Premiership sides have their own channel on Sky. For example Man-United have a channel called MUTV. It fills you in on all the latest club news from Junior to the full squad. ...read more.

Over the past couple of years media has started to take more notice of Division 1 football. It has helped to promote lower division football through local newspaper support, T.V (especially Sky) coverage and the use of a localised radio station. Through media the image of lower division football has been lifted and has gained more fans and more support. It has also gained a more professional profile. Premiership football has always had large coverage of all media types. Sometimes it seems to isolate single players of teams. This creates great hype around players that may have a positive effect (David Beckham) or a negative effect (George Best). Sometimes newspaper coverage drifts off the game of football and instead reports on the personal lives of players. I think if they are going to report on their lives it shouldn't be put on the sports pages. T.V media is the largest source for covering Premiership football and uses it to its advantage by making money. However football makes money out of The T.V media so they both gain advantages from each other. With regards to the amount of coverage Division 1 gets compared to the Premiership I think it is correct, because Division 1 should get less than the Premiership as there is less interest, but Division 1 should have enough so that there club gets noticed and is taken more seriously. I think all the types of media accomplish this balance. ...read more.