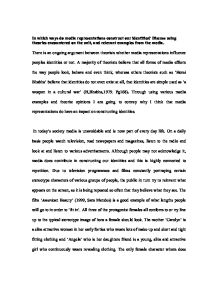 In which ways do media representations construct our identities? Discuss using theories encountered on the unit, and relevant examples from the media.

In which ways do media representations construct our identities? Discuss using theories encountered on the unit, and relevant examples from the media. There is an ongoing argument between theorists whether media representations influence peoples identities or not. A majority of theorists believe that all forms of media effects the way people look, behave and even think, whereas others theorists such as 'Homi Bhabha' believe that identities do not even exist at all, that identities are simple used as 'a weapon in a cultural war' (H,Bhabha,1979. Pg168). Through using various media examples and theorist opinions I am going to convey why I think that media representations do have an impact on constructing identities. In today's society media is unavoidable and is now part of every day life. On a daily basis people watch television, read newspapers and magazines, listen to the radio and look at and listen to various advertisements. Although people may not acknowledge it, media does contribute in constructing our identities and this is highly connected to repetition. Due to television programmes and films constantly portraying certain stereotype characters of various groups of people, the public in turn try to reinvent what appears on the screen, as it is being repeated so often that they believe what they see. ...read more.

Media representations also effect the way we view and identify other people. It appears that only a small majority of people are represented through media. The majority of television programmes and films consist mainly of white people. For example the whole cast of 'American Beauty' are white which is an unrealistic way of portraying America as in reality it has such an ethnic diverse population. This is also true in television programmes like 'Eastenders' whom mainly have a white cast, which again is an untrue way of portraying the location its set in. Although television is highly populated by white people over the recent years other ethnic groups have began to be acknowledged and appear in television and films, yet it appears that when they do finally reach media they are negatively represented, 'Eatenders' is a key example. In the whole of the cast there are only three black male characters, all of which seem to be stereotyped by their skin colour. One of which is 'Paul' who is unemployed, in to dodgy deals and who is having an affair with a female who is already in a relationship, the other is his father who runs a bed and breakfast, yet hardly ever seems to have any customers and seems to have no real role except as being a comedy figure and finally ...read more.

need to be super slim and instead just try to be healthy, rather than letting their weight and image take over their whole life. Through doing research on various media mediums and the way they effect people I think that its clearly evident to say that media representations do not simply reflect identities that they actually construct them. I think that this is true for all types of media mediums as we are constantly inflicted by them, that they become part of our everyday life. Many people do not like to believe that they are influenced my media, but that is clearly not true as nearly everyone has gone out and brought a product after seeing an advert about how good it is and taken on a certain opinion on a subject after reading someone else's view point of it in a newspaper or a magazine, as you would have often only been told just one side of the story. In conclusion, it is clear that media does highly contribute in constructing a persons identity, as media plays such a vast part in everyone's life that instead of media reflecting society 'we now have a situation where society is reflecting......the imaginations of some in the media industry.' ((C,Beyer, 2002. pg19). This quote alone emphasises how powerful media has become in constructing one's identity. ...read more.