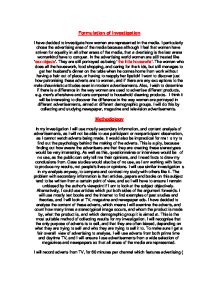 Investigation of How Women are Represented in the Media

Formulation of Investigation I have decided to investigate how women are represented in the media. I particularly chose the advertising area of the media because although I feel that women have striven for equality in all other areas of the media, that advertising is the last arena womankind have to conquer. In the advertising world women are still treated like 's*x objects'. They are still portrayed as being 'the little housewife'. The woman who does all the housework, food shopping, and caring for the kids, but still manages to get her husband's dinner on the table when he comes home from work without having a hair out of place, or having to reapply her lipstick! I want to discover just how patronising these adverts are to women, and if there are any exceptions to the male chauvinistic attitudes seen in modern advertisements. Also, I wish to determine if there is a difference in the way women are used to advertise different products, e.g. men's aftershave and cars compared to household cleaning products. I think it will be interesting to discover the difference in the way women are portrayed in different advertisements, aimed at different demographic groups. I will do this by collecting and studying newspaper, magazine and television advertisements. Methodology In my investigation I will use mostly secondary information, and content analysis of advertisements, as I will not be able to use participant or nonparticipant observation, as I cannot watch adverts being made. It would also be impractical for me to try to find out the psychology behind the making of the adverts. This is a pity, because finding out how aware the advertisers are that they are creating these stereotypes would be very interesting. As well as this, questionnaires or interviews would be of no use, as the public can only tell me their opinions, and I need facts to draw my conclusions from. ...read more.

I remained unbiased throughout my investigation, but, I would've also liked to have a much larger sample of advertisements, from television and a wider range of newspapers + magazines to produce more reliable results, There is no missing information in my study, and seeing as I chose a broad range of TV advertisements ( by recording both daytime and prime time TV), newspaper and magazines, my information is not biased in any way. My secondary information is........ There are only 3 ways I could have improved my investigation, I will explain what they are, and how they would have aided my investigation. * Improving the size of my sample, I would have liked to analyse a larger sample of adverts than I was able to do. This was because I only had a limited period of time available to me. This would have made my results more reliable. * Improving the range of my sample, to cover many more newspapers + magazines. Once again, I was unable to do this because I only had a small amount of time, and this would have also improved the reliability of my results. * Improving my results by using more people to analyse the adverts. This would have also shown me different views on gender stereotyping, from different people, and it would have been interesting to use people from different social backgrounds. Also different age groups and different sexes, (to get the male perspective)would have been interesting, particularly to see if their opinions contrast. I could not do this due to lack of time. * I would have liked to compare my investigation to more sociologists results, and see if there were further correlations or contrasting points which I could investigate. For an extension activity, I would have liked to study advertisements from the past, to see if they have changed in their stereotyping of women over the decades. I expect that while the stereotyping has improved, advertising is still not an equal area for women. I would have enjoyed proving or disproving this theory. ...read more.