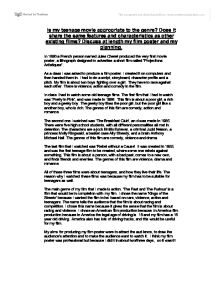 Is my teenage movie appropriate to the genre? Does it share the same features and characteristics as other existing films? Discuss at length my film poster and my planning

Is my teenage movie appropriate to the genre? Does it share the same features and characteristics as other existing films? Discuss at length my film poster and my planning. In 1890 a French person named Jules Cheret produced the very first movie poster, a lithograph designed to advertise a short film called "Projections Artistiques". As a class I was asked to produce a film poster. I created it on computers and then handed them in. I had to do a script, storyboard, character profile and a pitch. My film is about two boys fighting over a girl. They have to race against each other. There is violence, action and comedy in the film. In class I had to watch some old teenage films. The first film that I had to watch was 'Pretty in Pink', and was made in 1986. This film is about a poor girl, a rich boy and a geeky boy. The geeky boy likes the poor girl, but the poor girl likes another boy, who is rich. ...read more.

America also has lots of driving tracks, and this would be useful for my film. My aims for producing my film poster were to attract the audience, to draw the audience's attention and to make the audience want to watch it. I think my film poster was professional but because I did it in about two/three days, so it wasn't as good as I could have done. My film poster contained the release date and was nicely spaced out. My film poster had a picture of a speed meter as the background. The arrow is pointing at 250km/hour. This shows that the cars can go really fast, and so the audience would instantly know that this film poster is promoting a racing film. There are three cars and I smudged the backs of them, so it makes them look as they are going really fast. One of the cars has a gold crown on there, which represents a king. I put the 15 certificate logo in the middle of the speed meter. ...read more.

My product has followed the conventions that I have picked. It has action/violence, where two boys fight, using their fists, over a girl. It also has comedy, where some prisoners take the piss out of Daren Bent, who was sent to prison for underage driving. It even has crime in the film, as Vincent Green was sent to prison for underage driving. Overall, I think that I have made the right decision in making this film, because I think that this film will be a success, and lots of people went to watch "The Fast and The Furious: Tokyo Drift", and because my film is similar to that film, then lots of people probably will come to watch my film. If I had to change one thing, then it would probably be changing the genre, as there are many films about two boys fighting over a girl and fast cars, like: 'The Fast and The Furious', '2 Fast 2 Furious', 'The Fast and The Furious: Tokyo Drift', 'Transporter', 'Transporter 2' and 'Transporter 3'. By Sachin Shah ...read more.