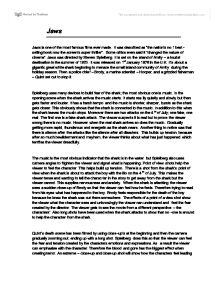 Jaws. Spielberg uses many devices to build fear of the shark; the most obvious one is music. In the opening scene when the shark arrives the music starts. It starts really quietly and slowly but then gets faster and louder.

Jaws Jaws is one of the most famous films ever made. It was described as "the nation's no.1 best-selling book now the screen's super thriller". Some critics even said it "changed the nature of cinema". Jaws was directed by Steven Spielberg. It is set on the Island of Amity - a tourist destination in the summer of 1975. It was released on 1st January 1976 in the U.K. It's about a gigantic great white shark beginning to menace the small island community of Amity during the holiday season. Then a police chief - Brody, a marine scientist - Hooper, and a grizzled fisherman - Quint set out to stop it. Spielberg uses many devices to build fear of the shark; the most obvious one is music. In the opening scene when the shark arrives the music starts. It starts really quietly and slowly but then gets faster and louder. It has a harsh tempo and the music is shorter, sharper, bursts as the shark gets closer. This obviously shows that the shark is connected to the music. In addition to this when the shark leaves the music stops. Moreover there are two attacks on the 4th of July; one fake, one real. The first one is a fake shark attack. The viewer suspects it is real but to prove the viewer wrong there is no music. ...read more.

Then was the one in the pool with the old man; near chief Brody's son. Next comes the genuinely terrifying part. The three main characters Brody, Hooper and Quint are at sea to catch the shark. When the shark arrives it attacks repeatedly instead of one big attack. This boosts fretfulness because before you can relax here it comes again. The shark turns out to be very clever. Hooper goes under the water to kill it but the shark destroys the anti-shark cage. This leads to Hooper having to hide under water. Then the shark goes on to attack the boat ending in Quint dying. This frightens the viewer because the viewer feels if 'the confident Quint' dies then no-one else can survive either. The characters' reactions especially Brody and his wife have built up a lot of fear for the shark. When Brody's wife sees the shark attacking a boat in the shark book, she suddenly wants her son out of the boat. This shows that the picture had a great affect on Brody's wife - frightening her exceedingly. This shark is a "mean fighting machine who eats and makes little sharks". These comments are made by Quint/Hooper. These words strike the viewer with horror as they are describing the monster shark and the comments give the sense that there is no hope if the shark doesn't go away. ...read more.

The timing of the attacks are spine-tingling because before the viewer get to relax from one, next comes another. This builds up apprehension so that the viewer stay petrified throughout the whole movie and Spielberg can get the effect he wants. Another technique that builds up suspense is the involvement of characters. The way the mayor says no to close the beaches leading to attack on the boy. However for the death of the boy, Brody feels responsible because he should have forced the mayor to close the beaches. This shows that some of the characters are not taking this problem seriously enough. Spielberg has cleverly used all aspects of the movie to create fear of the shark. I personally think that the most macabre part was when Hooper and Brody were using the support of those floating barrels to get back to Amity Island. Quint had been killed and those two were alone in the whole sea. I felt like another shark would come and kill them Even though the one around had been killed. I felt this way because there was no-one around. To show this a long shot had been used. However when they got back I breathed a sigh of relief. I liked this film because it wasn't just blood and gore but was actually filled with tension and suspense to petrify the viewer from inside. In my opinion this was a bone-chilling and hair-raising film. By Sonia Kaur ...read more.