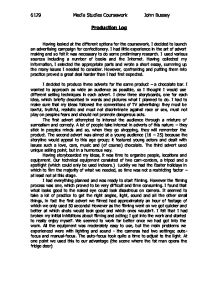 Launch an advertising campaign for confectionery.

Production Log Having looked at the different options for the coursework, I decided to launch an advertising campaign for confectionery. I had little experience in the art of advert making and so felt it was necessary to do some preliminary research. I used various sources including a number of books and the Internet. Having collected my information, I selected the appropriate parts and wrote a short essay, summing up the many issues I needed to consider. However, confronting and putting them into practice proved a great deal harder than I had first expected. I decided to produce three adverts for the same product - a chocolate bar. I wanted to approach as wide an audience as possible, so I thought I would use different selling techniques in each advert. I drew three storyboards, one for each idea, which briefly described in words and pictures what I planned to do. I had to make sure that my ideas followed the conventions of TV advertising: they must be lawful, truthful, realistic and must not discriminate against race or s*x, must not play on peoples fears and should not promote dangerous acts. The first advert attempted to interest the audience through a mixture of surrealism and comedy. A lot of people take interest in adverts of this nature - they stick in peoples minds and so, when they go shopping, they will remember the product. ...read more.

Finally I had to transfer them from the computer onto VHS. They were now complete after a very many hours of hard work. Analysis and evaluation The first advert is designed to look surreal. This is achieved to a large extent; the start of the advert shows a fat man appearing from what seems like nowhere. The lighting in this opening scene I think is particularly effective; there is a kind of eerie blue glow, which connoted ideas of futurism and space travel. This, in conjunction with the 2001 - Space Odyssey music is very effective. In fact, this could be a big selling point for the chocolate bar - the intertextual links with 2001 - A Space Odyssey would attract fans of the film to the advert and make them want to buy the chocolate bar. Also the viewer will be gripped by the surreal images, therefore wanting them to keep watching. However the next scene, although surreal in some ways, relied more on comic effect of the fat mans belly bouncing up and down in time to the music. The editing skill used in doing this is truly reflected because everyone who watched it laughed at it. Perhaps the most ingenious part is the opening of the fridge - a kind of heavenly light seemed to be streaming forth from inside of the fridge. ...read more.

I had also wanted the advert to be funny, which it is, but the humour came from both the irony of a boy having caramel and chocolate poured on his fingers and the comic appeal of him waking and smearing it all over his face! This advert had a voiceover of a man with a jordy accent, which we speeded up. This to most viewers sounds extremely funny. The voiceover, "No, no, no! Its two fingers of BISCUIT laced in caramel and covered in thick milk chocolate." explained an otherwise bizarre (and useless) advert. Again the advert featured the double trouble logo and slogan (voiced by the old man) at the end. The music in the advert is quiet to begin with, to make it sound like a stereo being played in the background, but it is gradually faded up to create excitement when the boy awoke. The advert is actually the most descriptive of the three. The complete and finished adverts look good enough to be shown on TV. The combination of fast editing and catchy soundtracks contributed to create an attractive atmosphere. We had done what we aimed to achieve - made three adverts for the same product, but to sell the product in different ways. I believe that, if given a similar task to do, I could do it far more quickly and efficiently, but as a first effort at television advertising I think they work very well and I am most proud of them. 6129 Media Studies Coursework John Bussey ...read more.