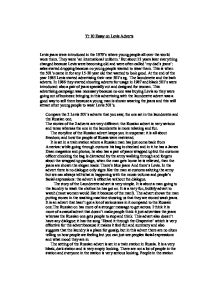 Yr 10 Essay on Levis Adverts Levis jeans were introduced in the 1970's where young people all over the world wore them. They were 'an international uniform.' But about 12 years later everything changed because Levis were becoming old and were often called 'my dad's jeans': sales started dropping because no young people wanted to wear them. This is when the 501's came in for any 15-20 year old that wanted to look good. At the end of the year 1985 Levis started advertising their new 501's eg. The launderette and the bath adverts. In 1986 they started shooting adverts for usage in 1987 and black 501's were introduced: also a pair of jeans specially cut and designed for women. This advertising campaign was necessary because no-one was buying Levis so they were going out of business: bringing in this advertising with the launderette advert was a good way to sell them because a young man is shown wearing the jeans and this will attract other young people to wear Levis 501's. Compare the 2 Levis 501's adverts that you saw, the one set in the launderette and the Russian one. The stories of the 2 adverts are very different: the Russian advert is very serious and tense whereas the one in the launderette is more relaxing and fun. The storyline of the Russian advert keeps you in suspense: it is all about freedom; and how the people of Russia were restricted. ...read more.

The Levis men in the adverts are very different both with the way they act and the way they look. The man in the Russian advert is very suspicious looking and is dressed very shabby and not very presentable. He looks very nervous and guilty. He looks suspicious because the audience never really see his face it is always hidden and we can only always see his eyes that are always wandering around so he is never looking in one place. The character is a shadowy figure because he is seen wearing a long black coat, which is very mysterious looking so when he is walking outside he looks like a shadow. You tell this man has an absence of warmth, comfort, privacy and pleasure so I think buying the jeans and wearing them brings all this to him. The man always feels like he is being watched by someone he had no privacy so he knew the only place he was safe in was his own house. On the other hand the Levis man in the launderette is cool, calm and relaxed. He walks in the launderette like he owns the place because he is confident within himself he knows that when he walks in their all attention will be focused on him. I think he is feeling this confident because he is wearing his Levis jeans. ...read more.

Then it flips round and says: "And there's Levis." I think this looks really effective because it really stands out to get the audience to see it, and the way they introduce the new line; at the same time the man turns the jeans over the slogan turns in the same direction. At the end of the advert in the launderette a pair of jeans is shown at a close up and a very small slogan reads: "The original shrink to fit jeans." Then a blackout and the same jeans come back on now with slogan reading: "Now available stonewash." The logo is next to the slogan in red so the logo does stand out. In both adverts a lot of cultural references are made especially in the Russian one. First of all the advert shows a photo of Lenin in the entrance of the hall this is telling us he is someone important to the Russians, this is showing us power having the army walk through and the man salute them is also showing power it is also showing us fear. Having the James Dean photos and magazine is showing us he has come from America a country of freedom, in Russia you always have the feeling you are being watched that you are under surveillance or something because people everywhere are watching you. It is showing us that everyone is made to feel guilty there: the man is bringing in a pair of jeans but is feeling guilty about it. ...read more.