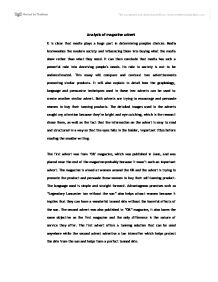 Magazine advertising comparison. Both adverts are trying to encourage and persuade women to buy their tanning products. The detailed images used in the adverts caught my attention because theyre bright and eye catching,

Analysis of magazine advert It is clear that media plays a huge part in determining peoples choices. Media brainwashes the modern society and influencing them into buying what the media show rather than what they need. It can then conclude that media has such a powerful role into deceiving people's needs. Its role in society is not to be underestimated. This essay will compare and contrast two advertisements promoting similar products. It will also explain in detail how the graphology, language and persuasive techniques used in these two adverts can be used to create another similar advert. Both adverts are trying to encourage and persuade women to buy their tanning products. The detailed images used in the adverts caught my attention because they're bright and eye catching, which is the reason I chose them, as well as the fact that the information on the advert is easy to read and structured in a way so that the eyes falls in the bolder, important titles before reading the smaller writing. The first advert was from 'OK' magazine, which was published in June, and was placed near the end of the magazine-probably because it wasn't such an important advert. ...read more.

The camera is showing the whole body of the woman which makes her the focal point. The image in this advert, like the first, has indexical meaning. The woman is wearing white bikini to show the colour or the shade of the skin 'Now great protection and a beautiful tan is plain sailing'. The word 'sailing' has been used as it connotates smoothness because the action of sailing is smooth and fast just like when the target audience imply the tan intensifier worked in an instant or applied quickly on their skin and makes it smoother. The blue sky and calm water shows that you don't have to worry about your skin while you do some activities, for example sailing, as there is a product that can protect you from the sun. These things make the product more appealing to some people. Both adverts adapt language to advertise their products. The slogan for the Lancaster Sun is "LEGENDARY LANCASTER TAN, WITHOUT THE SUN' it uses alliteration, this makes the target audience remember the slogan better as is it easy to memorise and remember. It is also very clear and has connotations with a meaning relating to the subject. ...read more.

"It has been scientifically proven to give you the fake tan you so badly crave for." This catches the readers' attention as it uses words such as 'crave', this gives the idea that the consumer would find it nearly impossible to live without it. "Sunon has a shimmering bronze look that will leave you feeling good not only on the outside but also on the inside". This portrays an image in the readers' mind as it uses the word 'shimmering' to describe the way it looks, suggesting that it is beaming through even on daylight. "It gives you the satisfaction on worth living for..." Finally this sums up the description as it acts like a cliff hanger therefore attracting the audience to go out and buy the product. I think that my advert is quite successful, although it could have been improved using a clever connotation as 'LEGENDARY LANCASTER TAN, WITHOUT THE SUN', which would make more readily stay in the mind. The image could also have been improved by adding colours to the advert itself to try and show the effect of the product I am advertising to my target audience. Also by including more information about the product this will improve the advert much better. Shiela Narito 10C3 ...read more.