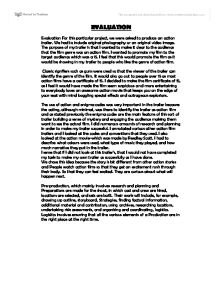 EVALUATION Evaluation For this particular project, we were asked to produce an action trailer. We had to include original photography or an original video image. The purpose of my trailer is that I wanted to make it clear to the audience that the film genre was an action film. I wanted to promote my film to the target audience which was a 15. I feel that this would promote the film as it would be showing in my trailer to people who like the genre of action film. Classic signifiers such as guns were used so that the viewer of the trailer can identify the genre of the film. It would also go out to people over 15 as most action films have a certificate of 15. I decided to make the film certificate of 15, as I feel it would have made the film seem suspicious and more entertaining to everybody loves an awesome action movie that keeps you on the edge of your seat with mind boggling special effects and outrageous explosions. The use of action and enigma codes was very important in the trailer because the acting, although minimal, was there to identify the trailer as action film and as stated previously the enigma codes are the main feature of this sort of trailer building a sense of mystery and engaging the audience making them want to see the actual film. ...read more.

I chose this font as old fashioned fonts look suspicious. I wanted the target audience to feel confuse whilst they were reading the narrative. The name of the trailer was called Two Words. I think that this was a good name as it represented all of what the storyline was about. The main idea of the trailer was that there were a four teenagers girl that were good friend but one day because of their one friend came late they had fight which lead to a big problem. In our trailer, which we called "TWO WORDS", my group and I shared the roles equally as there were 5 of us we had to alternate holding the camera, acting shots, preparing pre production plan. Before filming we already decided which shots we needed and had a good idea where to film effective footage. As we only shot what we thought we might need when it came to editing it was quite easy to cut down and crop certain parts of filming and one example is the cuts between the pictures and the names on a notepad. I feel that the editing was an extremely important part in creating a action trailer to make seen as professional and effective. ...read more.

The experience using this equipment was very great because I never use this equipment. I had difficulties using Mac but I overcome this problem by asking the teacher and taking help her help. The outcome of our final sequence was quite close to the original ideas. There were alterations along the way but we managed to create a sequence that not only met the criteria set but I personally feel in many ways exceeded them. Shots like the dolly down view ones proved extremely effective. Overall, I think that I have successfully completed what I was asked to do which was to make a action trailer and include all of the codes and conventions that are usually in a action trailer. I feel that the only thing that I could improve was how short the actual trailer was. When my fellow class mates were watching it, it seemed to go so quick. It seemed far too short. So I think that I could have made it a bit longer. I have learned what exactly I need to put into an action trailer. I have to decide the type of font to use, what colours to use, what music to use and many other things. Before, I thought it was going to be easy but then I realised it was much harder. All in all, I feel very proud of my trailer and think I completed the task effectively. ...read more.