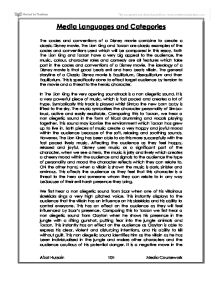 Media Languages and Categories The codes and conventions of a Disney movie combine to create a classic Disney movie. The Lion King and Tarzan are classic examples of the codes and conventions used which will be compared in this essay. Both The Lion King and Tarzan have a very big appeal to the audience, the music, colour, character roles and comedy are all features which take part in the codes and conventions of a Disney movie. The ideology of a Disney movie is that good beats evil and hero beats villain. The general storyline of a Classic Disney movie is Equilibrium, Disequilibrium and then Equilibrium. This is specifically done to effect target audience by tension to the movie and a threat to the heroic character. In The Lion King the very opening soundtrack is a non diegetic sound. It is a very powerful piece of music, which is fast paced and creates a lot of hype. Symbolically this track is played whilst Simba the new born baby is lifted to the sky. The music symbolises the character personality of Simba-loud, active and easily excitable. Comparing this to Tarzan, we hear a non diegetic sound in the form of tribal drumming and vocals playing together. This sound may iconize the environment which Tarzan has grew up to live in. Both pieces of music create a very happy and joyful mood within the audience because of the soft, relaxing and soothing sounds. ...read more.

They will be suspicious and be worried about his mental ability and physical personality. The mise en scene in The Lion King for heroes is always very bright and positive. In the very opening scene we see Simba being lifted into the rising sun. The camera angle used here is a low angle shot; this I very important as Simba is seen very high up and portrays to the audience his level of importance within the film and how he is a good character. In this shot, the sun is very important as the audience can recognise that it can be classed as an icon where it is always shining upon the heroes. Another feature In The Lion King is that the skies are always blue and welcoming. An example of this is hen Simba goes out into the wild for the first time. Once again a low angle shot is used to make Simba look like a heroic character and appeal to the audience. The mise en scene has a big effect on the audience as whenever Simba is present in the scene the mise en scene is without fault and complete. Therefore the audience will be attracted to make them feel relaxed and in a joyful mood. Comparing this to Tarzan, the general mise en scene is wild and green; although the sun is always still shining on Tarzan to make the audience aware he is a good character. ...read more.

The audience will be affected by this as they will pick up that he is animal like and therefore will not appeal to them. All of these are connotations of Disney villains helping use understand the character role which he plays. Comparing the two villains, I feel that Scar plays a much more effective villain. This is because of his general appearance with sharp and angular features and fearsome claws which can be compared to the size of his face. This shows the villainous intent very well and has a dramatic effect on the audience because of his overwhelmingly scary appearance. My experience of Disney movies is that there is no better creator of animated movies. All of the features of a Disney movie fit together very well and form to produce a very effective and appealing film towards the target audience. The storylines which are created are suitable for their very wide target audience and will appeal to all aged audience. Comparing The Lion King and Tarzan, I personally feel that The Lion King is able to creat5e a more effective film. The character roles of the hero and villain are more distinguished. And they have clearly followed the codes and conventions of Disney movies. My personal view is that The lion King is a more enjoyable film to watch. In general Disney films are just fantastic to watch, they follow the codes and conventions of a classic film and create films which all ages of the family are able to watch and enjoy to a maximum ?? ?? ?? ?? Afzal Hussain 10E Media Coursework ...read more.