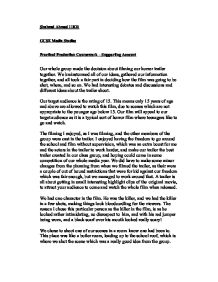 Shahzad Ahmed 11KR GCSE Media Studies Practical Production Coursework - Supporting Account Our whole group made the decision about filming our horror trailer together. We brainstormed all of our ideas, gathered our information together, and all took a fair part in deciding how the film was going to be shot, where, and so on. We had interesting debates and discussions and different ideas about the trailer shoot. Our target audience is the rating of 15. This means only 15 years of age and above are allowed to watch this film, due to scenes which are not appropriate to the younger age below 15. Our film will appeal to our target audience as it is a typical sort of horror film where teenagers like to go and watch. ...read more.

A trailer is all about getting in small interesting highlight clips of the original movie, to attract your audience to come and watch the whole film when released. We had one character in the film. He was the killer, and we had the killer in a few shots, making things look bloodcurdling for the viewers. The reason I chose this particular person as the killer in the film, is as he looked rather intimidating, no disrespect to him, and with his red jumper being worn, and a black scarf over his mouth looked really scary! We chose to shoot one of our scenes in a room know one had been to. ...read more.

It was good in the scene of that it was thrilling, even though it was so basic, but the editing spiced things up a lot. If we were to redo the Trailer, I personally would add more characters, different scenes, different camera angles and different digenetic sounds. I had the main roll in most of the work put towards this project. As I come up with more of the ideas, I shot the trailer, and also edited the trailer myself. I enjoy editing, and I have had practice before, therefore it was my choice to do this. The trailer does fulfil its purpose, and did attract the target audience as other groups were looking at our final project, and the feedback we had was very positive. ...read more.