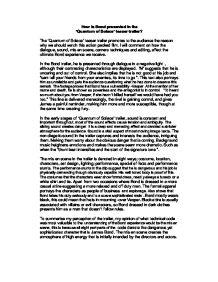 How is Bond presented in the 'Quantum of Solace' teaser trailer? The 'Quantum of Solace' teaser trailer promotes to the audience the reason why we should watch this action packed film. I will comment on how the dialogue, sound, mis en scene, camera techniques and editing, affect the ultimate Bond experience we receive. In the Bond trailer, he is presented through dialogue in a negative light, although their contrasting characteristics are displayed. 'M' suggests that he is uncaring and out of control. She also implies that he is not good at his job and "cant tell your friends from your enemies, its time to go". ...read more.

In the early stages of 'Quantum of Solace' trailer, sound is constant and important throughout, most of the sound effects cause tension and ambiguity. The slicing sound creates danger. It is a deep and menacing effect and denoted a sinister atmosphere for the audience. Sound is a vital aspect of most moving image texts. The non-diegetic sound In the trailer captures and interests the audience, intriguing them. Making them worry about the obvious danger that is coming. Background music heightens emotions and makes the scene seem more dramatic. Such as when the "drum beat intensifies and the start of the signature tune". The mis en scene in the trailer is denoted in eight ways; costume, location, characters, set design, lighting; performance, special effects and performance stunts. ...read more.

The formal apparel portrays the characters as people of business and espionage. Also shows that Bond takes his duty seriously and Is a suave sophisticated male. Bond mostly wears black, this could mean that he is in mourning-over Vesper. Black attire is usually associated with villains or evil characters, so Bond dressed in dark clothes presents him as a man that doesn't follow rules. To summarise my perception of the trailer, my opinion of what technical code was most valuable to the understanding of the Bond experience would be the mis en scene, this is because all eight part parts of the code denote the dangerous yet sophisticated character that is James Bond. The mis en scene creates the atmosphere of high energy that is initially intended by the directors and actors. ...read more.