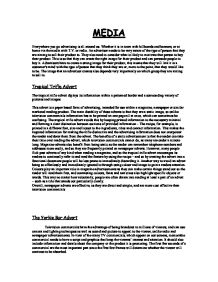 MEDIA Everywhere you go advertising is all around us. Whether it is in town with billboards and banners, or at home via the media with T.V. or radio. An advertiser needs to be very aware of the type of person that they are aiming to sell their product to. They also need to consider what is likely to motivate that person to buy their product. This is so that they can create the right image for their product and can persuade people to buy it. Advertisers have to create a strong image for their product, this means that they will link it in a customer's mind with the type of person that they think they are or, more to the point, that they would like to be. The image that an advertiser creates also depends very importantly on which group they are aiming to sell to. Tropical Trifle Advert The tropical trifle advert diplays its information within a patterned border and a surrounding variety of pictures and images. ...read more.

Colours play an important role in magazine advertisements as they can make certain things stand out so the reader will read them first, and contrasting colours, fonts and text sizes also highlight specific objects or words. This way no matter how reluctantly, people are often drawn into reading at least a part of an advert - such as a title that stands out particularly clearly. Overall, newspaper adverts are effective, as they are direct and simple, and are more cost effective than television commercials The Yorkie Bar Advert Television commercials have the advantage of being broadcast to millions of viewers, and can use camera and lighting techniques as well as sound and picture to appeal to the viewer, unlike radio and newspaper advertisements. In view of the many TV commercials, which appear on our screens, memorable commercial needs to have a script and graphics that keep the viewers' interest and attention. ...read more.

"It's not for girls!" The advert ends with a bright and eye-catching screen, with a large picture of a Yorkie bar 'stamped' onto it and the slogan... "YORKIE 'It Doesn't Come In Pink!' " Appears with a deep, deliberately masculine voice commentating again... "It's not for girls!" This advert is very aggressive and 'in your face' example of advertising but is also highly effective because of it's deliberately controversial theme - a campaign which is bound to, and has since been proven to, get people talking about the chocolate bar and in turn increase sales. And although the adverts main disadvantages include a misplaced belief in gender roles and the risk of offending large sectors of the buying public, it is unlikely that people will 'boycott' the product. It is more likely in fact to improve sales by woman deliberately buying the chocolate to disprove the advert as well as the obvious competition provided my men buying the product now that it has new masculine status. ...read more.