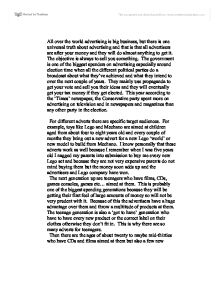 Methods used in Advertising, with reference to Boddingtons and Budweiser Adverts

All over the world advertising is big business, but there is one universal truth about advertising and that is that all advertisers are after your money and they will do almost anything to get it. The objective is always to sell you something. The government is one of the biggest spenders on advertising especially around election time when all the different political parties do a broadcast about what they've achieved and what they intend to over the next couple of years. They mainly use propaganda to get your vote and sell you their ideas and they will eventually get your tax money if they get elected. This year according to the 'Times' newspaper, the Conservative party spent more on advertising on television and in newspapers and magazines than any other party in the election. For different adverts there are specific target audiences. For example, toys like Lego and Mechano are aimed at children aged from about four to eight years old and every couple of months they bring out a new advert for a new Lego 'world' or new model to build from Mechano. I know personally that these adverts work as well because I remember when I was five years old I nagged my parents into submission ...read more.

This is obviously and exaggeration but it is not too far from the truth. Advertisers use many different methods to get you to buy their products, but most of the methods these days are to entertain you because before all the new techniques came in especially around the nineteen forties onwards a couple of ladies would come on and say in their exceptionally English accents things like 'Yes this powder gets my whites really white' but advertisers have finally started entertaining you with their adverts. Advertisers especially try to appeal to women by putting a perfect housewife on the screen with the product and very heavily hinting that if you buy the product then you will be like this lady and have a perfect home. An example of this is the 'Shake and Vac' advert, which had a lady singing a theme song and dancing as she throws this white powder down and then sucks it all up with a vacuum cleaner. A quotation from an advert analyser is '' She was obviously a very dirty and lazy woman who was cleaning up after her s*x romps earlier in the day so that her husband would not find out.'' ...read more.