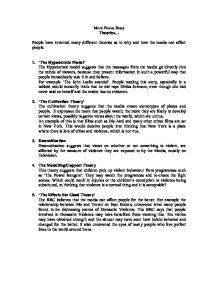 Moral Panics Essay Theories... People have invented many different theories as to why and how the media can affect people. 1. 'The Hypodermic Model' The Hypodermic model suggests that the messages from the media go directly into the minds of viewers, because they present information in such a powerful way that people immediately take it in and believe. For example 'The John Leslie scandal'. People reading this story, especially in a tabloid would instantly think that he did rape Ulrika Johnson, even though she had never said so herself and the reader has no evidence. 2. 'The Cultivation Theory' The cultivation theory suggests that the media create stereotypes of places and people. It expresses the more that people watch; the more they are likely to develop certain views, possibly negative views about the world, which are untrue. An example of this is that films such as Die-hard and many other crime films are set in New York. This would deceive people into thinking that New York is a place where there is lots of crime and violence, which is not true. 3. Desensitisation Desensitisation suggests that views on whether or not something is violent, are affected by the measure of violence they are exposed to by the Media, mostly on Television. ...read more.

Another factor which can alter the effect of the Media on individuals is the sort of lives they have; they're in a gang- or the issues they have; their parents have just divorced. A person in a gang would watch a violent death on TV and think nothing of it because they wouldn't know any different/better. Whereas someone who does not live a violent life, would find this programme disturbing and if they had children, would not want their children to watch it. If a soap opera came on TV and two of the characters were getting divorced, a child or teenager, whose parents had just gotten divorced would be extremely upset if they watched this programme. This is because it may bring back painful memories of the fights and arguments they had to watch each day or they might have recovered from their parent's divorce, and wouldn't be affected by it. Whereas a child or teenager whose parents had not divorced would simply view it as a soap opera and then walk away not affected in the slightest. Moral Panics Essay My View Of East Enders... When I watched the East Enders Episode, I was not disturbed, upset or inspired to do something bad. ...read more.

I think it shows that they have nothing better to do with their time. They need to understand that times have changed, and children these days do not play with dolls and obey their parents' every command. Children today know what violence is, and they know what sex is and I'm sure that if you asked your children, they could list you at least five unacceptable words! You might say that they know this because they watched television, and you're probably right! However, it is not that big a deal. Violence has always existed, inappropriate language has always existed. The only other explanation is that parents' views on subjects such as sex have changed. For example twenty years ago, if you had have asked your parents what sex was, they would have tried to avoid answering you or said they would tell you when you were older. That does not mean to say that it doesn't happen today. Nevertheless, if a child were to ask their parents what sex was, I think at least 50% of parents would explain it to them, because it's natural thing. In addition, they learn it at school. Why should it be such a taboo? Moreover, as for the Morals of today's society having changed because of Television and the media is incorrect. The people have to change their morals first before the media can exploit them! ...read more.