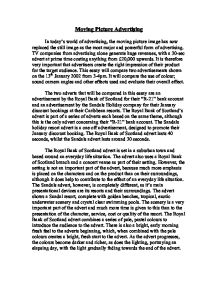 Moving Picture Advertising In today's world of advertising, the moving picture image has now replaced the still image as the most major and powerful form of advertising. TV companies from advertising alone generate huge revenues, with a 30-sec advert at prime time costing anything from �20,000 upwards. It is therefore very important that advertisers create the right impression of their product for the target audience. This essay will compare two advertisements shown on the 13th January 2002 from 3-4pm. It will compare the use of colour; sound camera angles and other effects used and evaluate their overall effect. The two adverts that will be compared in this essay are an advertisement by the Royal Bank of Scotland for their "R-21" bank account and an advertisement by the Sandals Holiday company for their January discount bookings at their Caribbean resorts. The Royal Bank of Scotland's advert is part of a series of adverts each based on the same theme, although this is the only advert concerning their "R-21" bank account. The Sandals holiday resort advert is a one off advertisement, designed to promote their January discount booking. The Royal Bank of Scotland advert lasts 40 seconds, whilst the Sandals advert lasts around 30 seconds. The Royal Bank of Scotland advert is set in a suburban town and based around an everyday life situation. ...read more.

The finishing sequence portrays a large Sandals logo and telephone number to persuade the audience to contact the company. The character and story line of the Royal Bank of Scotland advert mainly focuses on a young man and woman who are possibly engaged and also represent the age of the target audience. The advert mainly focuses on them and their interaction and portrays the "R-21" account as something that can be used not just as a bank account, but as a discount on concert tickets and CD's. This story line is important because it uses something that many people of that age can identify with and associates the Royal Bank of Scotland with buying CD's and concert tickets. It also implies that handling money at that age can be quite tricky, although this advert suggests that the R-21 account can make things easier and leave students with more social time. The Sandals advert uses a wide variety of characters, although all of the same ages - 30-40 years old. They are all shown on a Sandals resort, relaxed and having fun. The story line of the advert is focused on the setting and scenery of a Sandals resort and the activities that go on at a resort. ...read more.

effective as the Sandals advert because it portrays the product as being "too normal" and tries to blend in with everyday life. The Sandals advert avoids becoming "too tacky" by limiting the amount of words and print on screen. It also uses stereotyped characters to decrease the "luxurious" effect presented on screen to present the product as an affordable and normal one. In conclusion, it is evident that Britain as a society is very consumer based and prefers to spend money on well marketed products that may appear different to the competition in some way. Advertising on television is therefore a powerful means of communicating with an audience at any time of the year. From these adverts, we can learn that our society has high expectations of advertisements and expects to be entertained and not just given the basic facts. We can also learn that we are gullible and can be persuaded to buy things we don't need, that we are also materialistic and a society of consumers and believe that family values matter. The Royal Bank of Scotland advert in particular suggests that young people have more disposable income than they did in the past. However, these adverts also teach us that people may feel pressurised to spend money and that there is an emphasis on the need or desire for goods. ...read more.