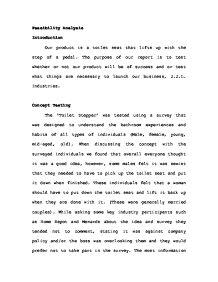 Our product is a toilet seat that lifts up with the step of a pedal. The purpose of our report is to test whether or not our product will be of success and or test what things are necessary to launch our business, J.J.L. Industries

Feasibility Analysis Introduction Our product is a toilet seat that lifts up with the step of a pedal. The purpose of our report is to test whether or not our product will be of success and or test what things are necessary to launch our business, J.J.L. Industries. Concept Testing The 'Toilet Stepper' was tested using a survey that was designed to understand the bathroom experiences and habits of all types of individuals (Male, female, young, mid-aged, old). When discussing the concept with the surveyed individuals we found that overall everyone thought it was a good idea, however, some males felt it was s****t that they needed to have to pick up the toilet seat and put it down when finished. These individuals felt that a woman should have to put down the toilet seat and lift it back up when they are done with it. (These were generally married couples). While asking some key industry participants such as Home Depot and Menards about the idea and survey they tended not to comment, stating it was against company policy and/or the boss was overlooking them and they would prefer not to take part in the survey. The most information we received through them was through the verbal conversation which we will call 'interviews'. Through the 'interviews' we found that the industry participants felt that it was a good idea and also found it quite humorous. Our Concept Statement was mainly showed to relatives, friends, classmates, and strangers. Unfortunately the our concept statement was not shown to companies/businesses due to the fact that companies could neither partake in the activity (company policy/work time) or they didn't have time for 'non-serious' business related issues. Overall we learned that just about everyone is picky about restrooms/toilets. We also learned that it is very hard to get information from key people when there is no reward or benefit in return. ...read more.

However, their product uses a control panel installed on the wall. It looks somewhat like a home security panel. Our product would be more basic. The seat moves up or down when a pedal is depressed, and flushes automatically. We are trying to reach out to the consumer who does not want to touch the toilet seat, or for women who wish to avoid the feel of cold porcelain because a male forgot to put down the seat. Getting our product on the market might be hard because there are only a few other companies that deal with toilets and toilet seats, and they are large, established companies. An example of a company that deals with the same idea for the toilet seat is the Nearest, by Toto. The Nearest is ready for competition because no one likes to touch toilet seats in public restrooms. There will be competition, but enough room for a new company in the industry because everyone uses a toilet. The bargaining power of the suppliers would be for us to make the toilet seat that is inexpensive but sturdy. People would not buy a special-feature toilt that breaks easily, but also would not want a toilet seat that is so expensive that it would be cheaper to simply install a whole new toilet. We are focusing on people who want a new feature, but nothing as extravagant as the Nearest toilet by Toto. To see how attractive the industry might be, you need to know if people are willing to spend money on improving their toilet seats. The industry is attractive because people would spend money on a toilet seat that offers convenience and hygiene. This toilet will make it easier for men to lift the seat and for women to avoid sitting on cold porcelain. The industry is a five because people are willing to make their toilet seats fit their needs. ...read more.

We are looking to sell between 5,000 and 6,000 units of the toilet stepper within the first year. We figure that in the first year we will not be expanding the company, waiting to see how well the product is selling after the first year. We are setting a price of $30 for each toilet stepper, which would give us sales of between approximately $105,000 and $126,000. We will have to sell between 96 and 115 units per week. We figure that, with a couple of sales to construction companies, these marks will be within reach. With total costs not being high, mainly because we are being given many resources, the company is looking at total costs being around $52,880 for the year. This is broken down into $9 for parts per toilet, research and development of $5,000, advertising of $15,000, employee wages $28,080, and general wages of $4,800 ($400 a month). This would give us a net income of $52,120. This would be divided among the three owners and, depending on what we were hoping to do in the next year, possibly put back into the company for expansion. Overall Attractiveness of Investment The overall attractiveness of this investment is that the cost for producing the toilet stepper is not really high because of all of the capital that was given to us by Louie's father and how inexpensive it is to produce the product. The break-even point in units is 2,280, which is a low number for the year. This means that we would have to sell about 44 units per week to get the $45,000 dollars that the three owners put into the company at the beginning of the year. The rate of return that we are looking at is about 115% on three owners' investments. The rate of return is high, but that is also because the net income is high, since our costs are low. The rate of return could change, of course, depending on what the plans for the company are in the future. ...read more.