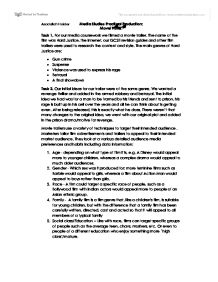 Task 1. For our media coursework we filmed a movie trailer. The name of the film was Hard Justice, the internet, our GCSE revision guides and other film trailers were used to research the content and style. The main genres of Hard Justice are: * Gun crime * Suspense * Violence was used to express his rage * Betrayal * A final showdown Task 2. Our initial ideas for our trailer were of the same genre. We wanted a revenge thriller and added in the armed robbery and betrayal. The initial idea we had was for a man to be framed by his friends and sent to prison, his rage is built up in his cell over the years and all he can think about is getting even. After being released, this is exactly what he does. There weren't that many changes to the original idea, we went with our original plot and added in the prison drama/motive for revenge. ...read more.

I believe costume is presented throughout the film as a powerful object. At first, when Maximus is first shown as a Roman General leading a decisive victory against Germanic barbarians his armour and status is meant to stand out, we immediately know who the main character and hero is. It shows him as a God like figure, a very powerful man, more than the emperor himself. However, later on in the film he is seen as only a slave wearing normal clothes, locked up in a cell. The contrast between these two events stays the same despite his change from `free` to `slave`, from `general` to `prisoner`; he is still presented as the hero and leader of the men Connotations and denotations play a big part in film culture today. Objects have multiple meanings; the connotation of the name is the attribute or attributes implied by the name. The denotation of the name is any object to which the name applies. ...read more.

The background picture shows the main character with a gun in hand and the moon in the background. This is an appropriate image as he is the main star and viewers will want to know who he is and what he's going to do throughout the film. An 18Film certificate tag has also been added to show the age rating as well as a DVD Video image. The spine simply shows the title in a small Times New Roman font with another age rating tag beside it. The back cover shows extra information and a short synopsis of the film. Again, an image of a gun and bullets is used to represent the crime in the film. A short eight line synopsis giving an overview of the film was written in a Arial type font but it has come out as another and is barely readable, the footer shows the cast with the main character written as an academy award winner to make the film seem more interesting. ?? ?? ?? ?? Asadullah Haider Media Studies Practical Production: Movie Trailer ...read more.