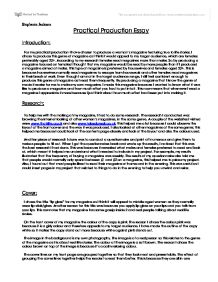 Practical Production Essay Introduction: For my practical production I have chosen to produce a woman's magazine featuring true to life stories. I chose to produce this genre of magazine as I think it would appeal to my target audience, which are females preferably aged 20+. According to my research females read magazines more than males. So by producing a magazine focused on females I thought that my magazine would be read by more people than if I produced a magazine aimed at males. This type of magazine is preferred by housewives and females aged 20+. This is because housewives normally read magazines to escape from housework and other females read magazines in their break at work. Even though I am not in the target audience range, I still feel confident enough to produce this genre of magazine as I read them frequently. By producing a magazine that I know the genre of made it easier for me to make my own magazine. I made this magazine because I wanted to know what it was like to produce a magazine and how much effort you had to put into it. This now means that whenever I read a magazine I appreciate it more because I just think about how much effort had been put into making it. Research: To help me with the making of my magazine, I had to do some research. The research I conducted was browsing the internet looking at other women's magazines, in the same genre. A couple of the websites I visited were www.thatslife.co.uk and also www.takeabreak.co.uk. ...read more.

The price and date are a convention of a magazine which is why I made sure it was clear to readers to see. The price of my magazine stands out a lot because I have placed it in a star and the word "bargain" surrounds it. The date of my magazine is issued in April, the reason for this is because this is when the weather begins to change and get warmer. My magazine sort of relates to the time of year because of the colours. For example I can't use bright pink. The layout of my front cover had the price, date and issue near the title because this is where the consumer would expect to find it. Contents Page: On my contents page, I have placed the title of the magazine at the top of the page and also aligned it centre. This is so that it clearly stands out. To also make it stand out I made the copy extra large and changed the colour of the title to bright pink. I used a subtitle on the contents page telling the reader "On the cover" this was done so that the readers knew where to find the stories in the magazine, which were featured on the front cover. This is important because it was these stories that drew their interest to the magazine in the first place, which means they will want to know where to find these stories and what pages they are on. I made the decision to print screen my front page and I edited it in paint. ...read more.

The target audience would read my magazine for a break, to sit down and relax, and escape from the everyday normal routine. The images I have used for my advert was an image of a happy couple who have just got married and the other image is of and engagement ring. The images used are black and white in colour, the reason for choosing these colour was because it gives them more of a soft focus and romantic look. The image of the happy couple was important to insert on to the advert because it shows the target audience just how good the wedding photography is. Also another thing that was important in the image was of the couple sharing a kiss. This also gives an element of romance. Conclusion: Overall, I think my magazine was a success and I think I done quite well in the making of it. I now know how much work and effort is put into making a magazine, and I will never take one for granted again knowing that it took someone a long time to lay it out, and receive stories through the post or online to write up and include in the magazine. I think my production is realistic as it features real life stories and my own photography. Whilst making this magazine found out how much you have to do for example: think of a name, the whole layout, colours, story, cover lines, think of a web address etc. I enjoyed making this product because it was fun and gave me an idea of what my job will be similar to as I want to become a journalist when I am older and have been to college and university. ?? ?? ?? ?? Stephanie Jackson ...read more.