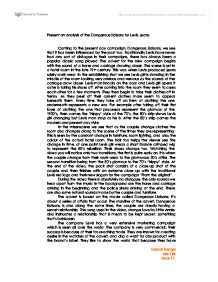 Present an Analysis Of the Dangerous Liaisons Advert for Levi's Jeans

Present an analysis of the Dangerous Liaisons for Levis Jeans Coming to the present day campaign, Dangerous Liaisons, we see that it has been influenced by the past too. Traditionally Levis have never had any sort of dialogue in their campaigns, there has always been a popular classic song played. The advert for the new campaign begins with the sound of a horse and carriage drawing closer. The scene is set in a hotel room in the late 19th century. This was when Levis produced jeans solely work-wear. In the establishing shot we see Levis girl is standing in the middle of the room looking very anxious and nervous as the sounds of the carriage draw closer. Levis man knocks on the door and Levis girl opens it as he is taking his shoes off. ...read more.

This is seen by the constant change in furniture, room lighting, and also the colour of the actual hotel room. The hair too helps the viewer see the change in time, at one point Levis girl wears a short blonde crimped wig to represent the 80's rebellion. Their shoes change too. Watching the video you will notice only two transitions, the first is quite early on, it is when the couple change from their work-wear to the glamorous 50's attire. The second transition being from the 50's glamour to the 70's "hippy" style. At the end of the video, the pack shot consists of a close-up shot of the couple and then finishes with an extreme close-up with the traditional Levis red logo and their new slogan for the campaign "From the original". ...read more.

They are known for creating desire in the watcher of the advert, and also a want for any product with the brand's label. They like to show the world that because they have been around for so long they clearly know better than any other company. Levis is very confident and they know that their reputation precedes them. Also marketing for Levis isn't a problem; from the length of the video we can see that they have a lot of funding. This advert appeals to the audience by inclining to their secret desires deep down. Levis know that there is a side to everyone that wants to do something rebellious. And Levis have made it clear that they are the very roots of jeans so if anyone wants to buy the best jeans it would be from the best known jean brand, Levis. ?? ?? ?? ?? Kamal Banga Mrs Kirk Year 11. ...read more.