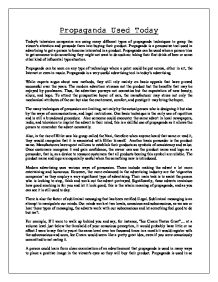 Propaganda Used Today Today's television companies are using many different types of propaganda techniques to grasp the viewer's attention and persuade them into buying their product. Propaganda is a persuasive tool used in advertising to get a person to become interested in a product. Propaganda can be used when a person tries to get someone to do something they might not want to do such as: taking their first drink of beer or some other kind of influential type situation. Propaganda can be seen on any type of technology where a point could be put across, either in art, the Internet or even in music. Propaganda is a very useful advertising tool in today's advertising. ...read more.

Also, in the rise of Hitler saw his group called the Nazi, therefore when anyone heard that name or read it, they would recognize that it is associated with Hitler himself. Another basic persuader is the product name. Manufacturers have spent millions to establish their products as symbols of consistency and value. Once customers recognize it and gain confidence, the owner can use the product name and logo as a persuader, that is, as a device to reassure customers that all products bearing this symbol are reliable. The product name and logo are especially useful when the something new is introduced. Modern advertising uses various ways of persuasion. These include making the advert a lot more entertaining and humorous. ...read more.

For example, If I were to walk up behind you and say, for instance, "Ice Cream Tastes Great".... at a volume level just below the threshold of your conscious perception, it would probably have little or no effect I were to say this to you at the same level over ten thousand times in a month it would register with the subconscious and soon, Ice Cream would seem like a pretty great idea, even if you were consciously committed to not eating it. A person could learn from close examination of an advertisement that propaganda is used in many ways to place a positive image in the viewer's eyes so they will buy their product. Propaganda is used in so many different ways in advertising. People do not even realize they are being persuaded into buying the product being advertised. ...read more.