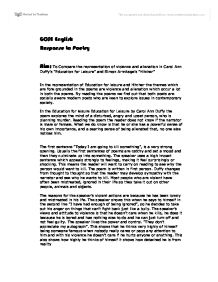 GCSE English Response to Poetry Aim: To Compare the representation of violence and alienation in Carol Ann Duffy's "Education for Leisure" and Simon Armitage's "Hitcher" In the representation of Education for leisure and Hitcher the themes which are fore grounded in the poems are violence and alienation which occur a lot in both the poems. By reading the poems we find out that both poets are socially aware modern poets who are keen to explore issues in contemporary society. In the Education for leisure Education for Leisure by Carol Ann Duffy the poem explores the mind of a disturbed, angry and upset person, who is planning murder. Reading the poem the reader does not know if the narrator is male or female. What we do know is that he or she has a powerful sense of his own importance, and a searing sense of being alienated that, no one else notices him. The first sentence "Today I am going to kill something", is a very strong opening. ...read more.

The speaker likes the power and control. "They don't appreciate my autograph". This shows that he thinks very highly of himself being someone famous when nobody really cares or pays any attention to him and with his violence he doesn't care if he hurts anyone or anything. This also shows how highly he thinks of himself it shows how detached he is from reality The second poem "Hitcher" written by Simon Armitage which is also about a troubled person, this time being a bit older than the person in "Education for Leisure" who is a bit annoyed with life and also wants to take his anger out on something. This person is somewhat psychologically disturbed and doesn't feel guilty of doing wrong. Like Carol Ann Duffy in "Education for Leisure" Simon Armitage uses the technique of writing in the first person. Armitage writes about violence in a relaxed manner. In Hitcher the speaker is a lot more explicit violent than the speaker in "Education for Leisure" as he has planned on killing a person that he doesn't even know. ...read more.

The speaker just like in the other poem is a bully and likes the sense of control and power. The speaker in "Hitcher" has nothing against the hippie but he is jealous of the way he has no responsibilities and is free. Between the two poems Duffy and Armitage have written about violence to show that people often have been mistreated before they turn to violence. In conclusion both poems have a similar representation of violence and alienation because they both involve a first-person narrative reflecting different extremes in society also reflecting their feelings and what they are experiencing. Both the characters in "Hitcher" are about the same age, one of whom has succeeded in escaping the life of having to go to work, paying bills and having a family the other caught up in it but unable to face up to its demands and threatened with losing his job. But in "Education of Leisure" it contains one character who is a disturbed, angry and upset person similar to the narrator in "Hitcher". Both narrators have something in common which is loneliness and being mistreated in life that is why they have turned to violence. ...read more.