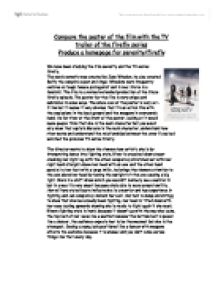 Serenity. Compare the poster of the film with the TV trailer of the firefly series.

Compare the poster of the film with the TV trailer of the firefly series Produce a homepage for serenity/firefly We have been studying the film serenity and the TV series firefly. The movie serenity was created by Joss Whedon, he also created Buffy the vampire slayer and Angel Whedons work frequently centres on tough female protagonist and in real life he is a feminist. The film is a revised extended production of the finale firefly episode. The poster for the film is very unique and subliminal in some ways. The whole look of the poster is very sci-fi like but it makes it very obvious that it's an action film with the explosions in the back ground and the weapons in everyone's hand. As for river at the front of the poster, looking at it would make people think that she is the main character but you would only know that captain Malcolm is the main character, understand how river works and understand the relationships between the crew if you had watched the previous TV series firefly. The director wants to show the viewers how artistic she is by interpreting dance into fighting style. River is crouched down almost crushing her right leg with the other completely stretched out with her right hand straight above her head with an axe and the other ...read more.

into a grey then a black and that is where her axe like weapon is raised with a beam of light flowing over it almost as if to say its blocking out the good and shows river is going into warrior mode. However it could be that the axe is angled over her head with the light hitting it making it glow so that it almost looks like a halo around rivers head telling the audience that river fights for good and not evil. The way the light hits the axes forms a cross shape just at the tip almost looking like a star, this links back to the biblical story of how Jesus Christ was born and how the 3 wise men had to follow a star to find him. The positioning of the star in this case could mean that river is the star as if she is the map and she is the chosen one almost sent from heaven blessed with the powers and knowledge to find and guide the rest of the crew to the planet merander. The white lining of river and the axe gives it a more realistic look unlike in cartoons when they are outlined in black making it obvious that it is animated. ...read more.

They have specifically chosen the characters to be shown on the poster because most of them are fighters * River-boots on so it's like armour because she normally walks around bare foot so she feels everything under her feet, fighting style is very raw and pro-active she will not wait to attack. * Zoe-pointing her gun forward< there must be an enemy approaching, from a military background already knows how to fight. * Jayne-middle of the explosion, enjoys fighting, he is angled specifically to show off his gun to show how manly and blood thirsty he is. * Captain Malcolm-leader of the group, head high very confident, gun down he doesn't feel like he needs to use it, angled with his back to Jayne to show how different they are because Jayne is a act 1ST think later kind of guy that enjoys violence but the captain is a tact full guy he tries to avoid violence and tries to do what's best for the team, angled towards Zoe because of their history and because he trusts her. * Inara-not really a fighter so she is in the far back and is the smallest, has the most connections to call on people to help in bad situations, has the most status. ...read more.

*** This essay contains some moments of very sophisticated analysis. However, it is let down by a lack of key media and linguistic terminology and poor sentence structures and grammar and overly chatty language.