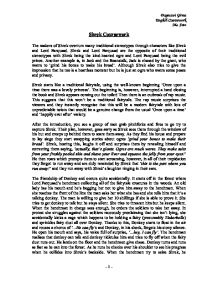 Shrek Coursework The makers of Shrek overturn many traditional stereotypes through characters like Shrek and Lord Farquaad. Shrek and Lord Farquaad are the opposite of their traditional stereotypes with Shrek being the kind-hearted ogre and Lord Farquaad being the evil prince. Another example is, in Jack and the Beanstalk, Jack is chased by the giant, who wants to 'grind his bones to make his bread'. Although Shrek also tries to give the impression that he too is a heartless monster but he is just an ogre who wants some peace and privacy. Shrek starts like a traditional fairytale, using the well-known beginning 'Once upon a time there was a lovely princess'. The beginning is, however, interrupted a hand closing the book and Shrek appears coming out the toilet! Then there is an outbreak of rap music. This suggests that this won't be a traditional fairytale. The rap music surprises the viewers and they instantly recognise that this will be a modern fairytale with lots of unpredictable twists that would be a genuine change from the usual 'Once upon a time' and 'happily ever after' variety. After the introduction, you see a group of men grab pitchforks and fires to go try to capture Shrek. Their plan, however, goes awry as Shrek sees them through the window of his hut and creeps up behind them to scare them away. ...read more.

When they get to Shrek's house, Donkey continues to irritate him by bouncing on the Chairs and Shrek's ability of not being able to stop him suggests that he isn't such a terrifying ogre. More proof is this is when the fairytale creatures turn up he can't make them leave. On the contrary, he gets locked out of his own house. When he demands to know what happened he finds out that Lord Farquaad had put all the fairy tale creatures into exile in Shrek's swamp. Shrek decides to go and see Lord Farquaad and get his swamp back. Accompanied by none other than Donkey, Shrek leaves for Duloc, the kingdom of Lord Farquaad. In Duloc, Donkey and Shrek find out that there is a tournament going on and they go to see Farquaad by walking into the middle of the ring. Farquaad then decides that the winner of his tournament would be the one who kills the ogre. Shrek, hearing this announcement doesn't accept the challenge from Lord Farquaad's knights but offers to settle it over a pint; seeing that none of them wanted to, he decided to fight. However, none of the knights prevail and as Shrek is about to ask for his swamp back, Farquaad awards him the 'honour' of being the person who would go on a noble quest. ...read more.

In this movie, we quickly learn that the Prince is not a traditional fairytale character because he shows his evil side very early in this movie and throughout the movie he shows no signs of a change of heart. As well as the characters, the settings are also not traditional. Shrek's swamp is the expected home of an ogre. On the other hand, the fact that Donkey and other Fairytale creatures follow him there and that Donkey even tried to set up home there suggests that it is not as unwelcoming as it should be. Lord Farquaad's castle is, traditionally, meant to be a place of magnificence but because of the torture of the Gingerbread Man, the hooded figures and many other things, it has become a place of violence and secrecy. Both of the main settings are much more different than their traditional stereotypes. In conclusion, the makers of Shrek turned the world of Prince Charming's and evil monsters upside down with this movie and showed that the ugly people aren't always the evil ones and that the rich and royal ones aren't necessarily good either. In general, they show that you shouldn't judge a book by its cover. Almost all of the characters have the opposite of their stereotypical attitudes. The makers off Shrek succeeded in their mission of reversing the traditional stereotypes on their heads. Dagmawi Girma English Coursework Ms. Soto - 1 - ...read more.