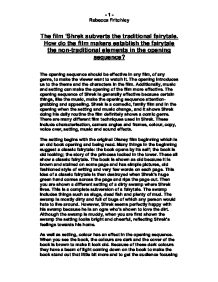 The film 'Shrek subverts the traditional fairytale. How do the film makers establish the fairytale the non-traditional elements in the opening sequence? The opening sequence should be effective in any film, of any genre, to make the viewer want to watch it. The opening introduces us to the theme and the characters in the film. Additionally, music and setting can make the opening of the film more effective. The opening sequence of Shrek is generally effective because certain things, like the music, make the opening sequence attention-grabbing and appealing. Shrek is a comedic, family film and in the opening when the setting and music change, and it shows Shrek doing his daily routine the film definitely shows a comic genre. There are many different film techniques used in Shrek. These include characterisation, camera angles and frames, colour, copy, voice over, setting, music and sound effects. The setting begins with the original Disney film beginning which is an old book opening and being read. Many things in the beginning suggest a classic fairytale: the book opens by its self; the book is old looking; the story of the princess locked in the tower. ...read more.

When the page is turned onto the page with the prince it zooms in on the prince. Then you have a close-up of the green hand when it rips the page out. Afterwards, you are shown a medium shot of Shrek coming out of the toilet followed by a long shot of Shrek's home. When Shrek is doing his strange daily routine you get a close-up of Shrek's face as he is brushing his teeth. You also have close-ups of the names of the actors that appear in mud or other objects in the swamp. Many more shots are used in the opening sequence and most are close-ups or long shots. This is because these are most effective. However, music also plays a large role in the effectiveness of the opening. The first piece of music you hear is soothing, gentle and soft. The piece of music is very orchestral, classical and romantic. This sort of music is what you would expect of an original fairytale. The second piece of music you hear is more upbeat, fun and enjoyable. It has an impact on you and makes you want to get up and dance around. ...read more.

The writing also shows what the film is going to be like because of the way the writing is presented on the screen. The writing you first see is in the book. It begins with what every classic fairytale begins with, 'once upon a time'. The style of this writing is very old fashioned and very traditional for a fairytale. Other writing such as the credits includes big names to encourage people to watch it because these big stars are in it. Such things like Cameron Diaz's' name written in the pond and Mike Myers name written in mud so it fits in with the ogre stereotype of being dirty. These places the names come up are rather unpleasant showing the film to be most unlike a classic fairytale. Overall, in my opinion, I think it is a brilliant opening with the way it switches from a classic fairytale to a subversion a fairytale in a mere second. It is an extremely effective opening and cleverly planned out and the reason why it is so effective is because it has never been done before. - 1 - Rebecca Fritchley ...read more.