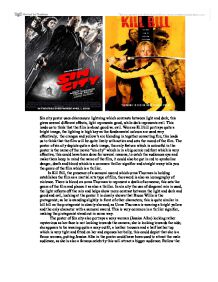 Sin city poster uses chiaroscuro lightning which contrasts between light and dark; this gives several different effects, light represents good, while dark represents evil. This leads us to think that the film is about good vs. evil. Were as Kill bill portrays quite a bright image, the lighting is high key as the fundamental colours are used very effectively; the oranges and yellow's are blending in together connoting fire, this leads us to think that the film will be quite lively with action and sets the mood of the film. The poster of sin city depicts quite a dark image, the only feature which is colourful in the poster is the name of the movie "sin city" which is in a big comic red font which is very effective, this could have been done for several reasons; to catch the audiences eye and make them keep in mind the ...read more.

quite similar in kill bill as the protagonist is clearly showed; as Urma Thurman is wearing a bright yellow and the only character with a samurai sword. This is very common in a thriller signifier, making the protagonist stand out in some way. The poster of Sin city also portrays a sexy woman (Jessica Alba) looking rather mysterious as her face is not looking towards the camera; she is looking towards the side, she appears to be wearing quite a sexy outfit; a leather trousers and a half leather top which is very tight and fitted on her and exposes her belly, this could depict that she is a fierce woman, putting Jessica Alba in the poster could have been used to attract the male audience, as she is also a famous celebrity this will attract a bigger audience. ...read more.

The title of "Sin City" could create a sense that the film will be an 18 because it will most probably involved sins, death and sex; the word "sin" tells us that things that are not meant to be done in reality will be done in the movie and create a tone of "breaking the rules". The two posters combine several distinct elements in a coherent way while also managing to give a clear summary of the film. The connotations behind the use of the colours black and red are very diverse but the main reason why blacks and reds were used was to follow the codes and conventions of a thriller poster. They were able to subconsciously set standards showing it is a trusted and valued institution for there movie, by adding in credits. Quentin Tarantino is very well known for many Martial Arts films especially kill bill, he as also directed in sin city; which could show why there are a lot of similarities. ...read more.