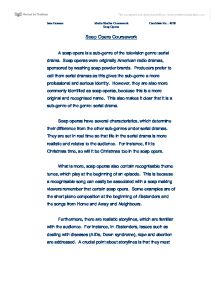 Soap Opera Coursework A soap opera is a sub-genre of the television genre: serial drama. Soap operas were originally American radio dramas, sponsored by washing soap powder brands. Producers prefer to call them serial dramas as this gives the sub-genre a more professional and serious identity. However, they are also more commonly identified as soap operas, because this is a more original and recognised name. This also makes it clear that it is a sub-genre of the genre: serial drama. Soap operas have several characteristics, which determine their difference from the other sub-genres under serial dramas. They are set in real time so that life in the serial drama is more realistic and relates to the audience. For instance, if it is Christmas time, so will it be Christmas too in the soap opera. What is more, soap operas also contain recognisable theme tunes, which play at the beginning of an episode. This is because a recognisable song can easily be associated with a soap making viewers remember that certain soap opera. ...read more.

An example of this is in Eastenders, when we see a well-known character get run over (such as Jamie Mitchell) and the ending tune is played. This makes the audience want to know if the character has survived or not and makes them want to watch the next episode. This leads to another characteristic of soaps; them being continuous. Shows such as Eastenders and Coronation Street have been running for decades, with Coronation Street already running, since 1960, for 46 years. The only time a soap opera would end would be if the television network axed it because of poor ratings and funding. Moreover, soap operas are usually set around a local street or area. These are places where lots of different stories can happen at one time. Examples of such locations are the Old Vic pub in Eastenders or the Coffee Shop in Neighbours. They are also places that the audience can identify with, in their own real lives. ...read more.

An advantage of watching soap operas is that they can strengthen social relationships with others, as knowledge of a story can be a main topic of discussion. However, a disadvantage may b that some may associate themselves so deeply with a soap, that fiction can be believed to be distorted from fact. An example of this is when actors are sent hate-mail because the audience despise certain characters and do not realise or remember that the character is just an act. Moreover, people may watch soap operas purely for entertainment or escapism, where seeing worse problems than their own could make them feel better. This relationship of why an audience chooses to watch this type of media is called the 'uses and gratifications' approach. For some, soap operas can fulfil personal and psychological needs, as people are able to see themselves reflected in a certain character. Soap operas may use their audience to gain money with high ratings, but the audience equally use soap operas through the 'uses and gratifications' theory to obtain pleasure in many different ways. ?? ?? ?? ?? Jane Jimenez Media Studies Coursework Candidate No. : 4058 Soap Operas ...read more.