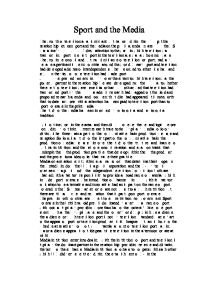 Sport and the Media

Sport and the Media The growth of television as a significant cultural form during the 1960s put the relationship between sport and the media on the public agenda. In late 1969, the US magazine Sports Illustrated drew attention to the ways in which television was transforming sport. In effect, sport in the television age was a 'whole new game'. The growing economic and cultural significance of television for sport gradually became a pertinent issue in countries around the world. Clearly sport and television had developed a degree of interdependence. They belonged together 'like ham and eggs'. In the view of some, television had 'made' sport Newsweek expressed concern, in 1967, over the extent to which television was the powerful partner in the relationship. Debates developed from the 1970s as to whether the effects of television were beneficial or harmful both argued that television had transformed sport. By the 1980s, academic research had mapped out the field and proposed research agendas and book-length studies had appeared. It is noteworthy that, to date, far more critical attention has been paid to television sport than to sport coverage in the print media. The study of the media has been informed by sociological and semiological traditions. ...read more.

A substantial amount of television sport, lacking major audience appeal, is outside peak time television, in the afternoon, or late at night. Media institutions enter into dealings with the institutions of sport, and television is typically the dominant partner in the relationship, providing revenue and dictating the terms of the exchange. Media institutions also have to compete with each other, which BBC did very effectively during the establishment of ITV in the 1950s, reinforcing its claim of 'BBC for Sport' by signing up key sports, producers and commentators on long-term contracts. During the 1960s and 1970s BBC sustained its service with coverage of major events and a wide range of sports. However, more aggressive competition from ITV during the 1970s became a greater challenge. Weathering this, the BBC preserved its dominance until the end of the 1980s, when the satellite channel Sky Sport, with a growing power to outbid anyone else for the rights to major events, began to emerge as a much more serious competitor to terrestrial television. From the 1980s, the rise of satellite and cable began to restructure the television audience, launching dedicated sports channels, and producing a shift from large, fairly heterogenous audiences, to smaller, more homogenous ones. ...read more.

In an under-resourced medium such as radio, the media professional often occupies a more isolated position. Journalists are often well aware of the gap between 'reality' and the media rendition of it. Accounts by media sport professionals provide useful evidence for the professional ideologies that frame production practices. Production practices can become taken for granted by media practitioners, and are naturalized very readily; tracing such practices in their formative moments can be instructive, revealing the choices that were later to solidify as professional commonsense. The conventions of commentary at the BBC, involving personalization, building audience interest and heightening drama were laid out by de Lotbiniere (1949) in a highly influential document that became the bible of commentary during the 1950s. Camera positions and cutting styles were established by processes of trial and error (see Wolstenholme, 1958) and only later, in the 1960s, became conventionalized. Sports journalism as a profession was, In large measure, a product of the late nineteenth century, as sports magazines appeared in significant numbers, and newspapers began including dedicated sports sections. Accounts of the careers of journalists and commentators reveal much about the attitudes underlying the formations of these professional practices. The focus on stars, the construction of dramatic interest and the relative marginalization of expertise, are all common features of media sport journalism ...read more.