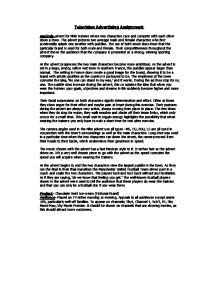 Television Advertising Assignment Analysis-advert for Nike trainers where two characters race and compete with each other down a town. The advert pictures two average male and female characters who first accidentally splash one another with puddles. The use of both sexes does show that the particular brand is used for both male and female. Their competitiveness throughout the advert shows the audience that the company is presented as a strong, winning sporting company. As the advert progresses the two main characters become more ambitious. As the advert is set in a large, empty, rather wet town in southern France, the puddles appear larger than normal. The setting in France does create a good image for the brand, showing it to be a brand with artistic qualities as the country is portrayed to be. The emptiness of the town connotes the idea, 'No one can stand in my way,' and it works. During the ad they stop for no one. ...read more.

The music chosen with the advert has a fast Mexican style to it. It etches fast as the advert drives on. It's a very well chosen piece to go with the advert as the speed connotes the speed you will acquire when wearing the trainers. As the advert begins to end the two characters view the largest puddle in the town. As they run the final in their final marathon the Manchester United Football Team drives past in a coach and soaks the two characters. The players look and turn back without any hesitation. As if they are saying, 'oh we know that feeling you get.' The well-known football players shown in the advert were used to tell the audience that these players do wear the trainers and that you can only be a football star if you wear them. Product- Chocolate Swirl Ice-cream (Fictional Brand) Audience- Placed on TV either morning or evening. ...read more.

The music - a chosen piece to have long base type qualities but also to have a strong rhythmic tune. I believe this is the best genre of music to be involved in this advert as it emphasises the homely feeling within the couple. The camera angles used in the advert are positioned in a way that the man looks over his shoulder to the phone, which is up close to the camera. This effect is done to make the phone look like an important part in the role of this man's actions and what happens later in the evening. This effect is again used in relation with the ice cream and the man, as the man looks over to the ice cream that is left out on the kitchen bench. This relationship theory reverts to the classes of gratification. The man and his ice cream, which later moves onto the man, the ice cream and the partner. This advert would be best placed during a long movie either on movie channels or terrestrial channels. ...read more.