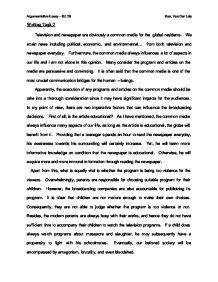 Television and newspaper - a common media for the global residents.

Writing Task 2 Television and newspaper are obviously a common media for the global residents. We attain news including political, economic, and environmental... from both television and newspaper everyday. Furthermore, the common media always influences a lot of aspects in our life and I am not alone in this opinion. Many consider the program and articles on the media are persuasive and convincing. It is often said that the common media is one of the most crucial communication bridges for the human - beings. Apparently, the execution of any programs and articles on the common media should be take into a thorough consideration since it may have significant impacts for the audiences. In my point of view, there are two imperative factors that can influence the broadcasting decisions. ...read more.

Apart from this, what is equally vital is whether the program is being too violence for the viewers. Overwhelmingly, parents are responsible for choosing suitable program for their children. However, the broadcasting companies are also accountable for publicizing its program. It is clear that children are not mature enough to make their own choices. Consequently, they are not able to judge whether the program is too violence or not. Besides, the modern parents are always busy with their works, and hence they do not have sufficient time to accompany their children to watch the television programs. If a child does always watch programs about massacre and slaughter, he may subsequently have a propensity to fight with his schoolmates. ...read more.

It is because we can probably learn from these appalling and dreadful experiences, which is almost the same as the concept of understanding the history of our world - learn from the past and try to avoid the same mistakes again. Moreover, it can also act as a moral course since people may show their sympathetic attitudes towards the victims and sufferers. Last but not least, the universal inhabitants may also being more alert about their social life: crime, aggression, corruption, and so on. Thus, it is indispensable to broadcast both good and bad news. Since television and newspaper are one of our recent communication bridges to our existing atmosphere, both audiences and producers should pay more attention on what articles are printing out or put more emphasis on what programs are broadcasting as it does have great impacts for our precious lives. Argumentative Essay - IELTS Ken, Van Der Lely ...read more.