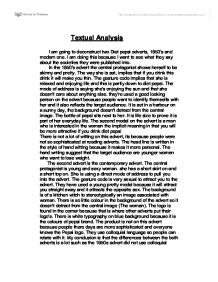 Textual Analysis I am going to deconstruct two Diet pepsi adverts, 1950's and modern one. I am doing this because I want to see what they say about the societies they were published into. In the 1950's advert the central protagonist shows herself to be skinny and pretty. The way she is sat, implies that if you drink this drink it will make you thin. The gesture code implies that she is relaxed and enjoying life and this is partly down to diet pepsi. The mode of address is saying she's enjoying the sun and that she doesn't care about anything else. ...read more.

The second model on the advert is a man who is interested in the woman the implicit meaning in that you will be more attractive if you drink diet pepsi There is not a lot of witting on this advert, its because people were not so sophisticated at reading adverts. The head line is written in the style of hand witting because it makes it more personal. The hand writing suggest that the target audience are younger women who want to lose weight. The second advert is the contemporary advert. The central protagonist is young and sexy woman. ...read more.

The logo is found in the corner because that is where other adverts put their logo's. There is white typography on blue background because it is the colours of pepsi brand. The product is not on this advert because people there days are more sophisticated and everyone knows the Pepsi logo. They use colloquial language so people can relate with it. My conclusion is that the differences between the both adverts is a lot such as the 1950s advert did not use colloquial language, the produced was shown, the model was less sexual and in the modern advert the model is more sexual and a lot colloquial language to attract the target audience and the product was not shown. ...read more.