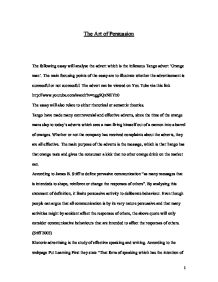 The Art of Persuasion The following essay will analyse the advert which is the infamous Tango advert 'Orange man'. The main focusing points of the essay are to illustrate whether the advertisement is successful or not successful. The advert can be viewed on You Tube via this link http://www.youtube.com/watch?v=ngg9QxNEYn0 The essay will also relate to either rhetorical or semantic theories. Tango have made many controversial and effective adverts, since the time of the orange mans slap to today's adverts which sees a man firing himself out of a cannon into a barrel of oranges. Whether or not the company has received complaints about the adverts, they are all effective. The main purpose of the adverts is the message, which is that Tango has that orange taste and gives the consumer a kick that no other orange drink on the market can. According to James B. Stiff to define pervasive communication "as many messages that is intendeds to shape, reinforce or change the responses of others". By analysing this statement of definition, it limits persuasive activity to deliberate behaviour. Even though people can argue that all communication is by its very nature persuasive and that many activities might by accident affect the responses of others, the above quote will only consider communicative behaviours that are intended to affect the responses of others. ...read more.

Commercial messages appear just about everywhere on TV, in magazines, newspapers, billboards, on the radio, on buses, in phone booths, sports arenas, on the Internet, even in public toilets. Considering that we live in an electronic generation, advertisers are challenged as never before to get their message to consumers. As a result, advertising's job is extremely difficult and very competitive. The key to creating advertising that engenders persuasion is to have a sound and properly focused advertising strategy. It is necessary to understand who the consumer is and what their attitudes and product usage habits are in order to develop this strategy. The Tango advert made such an impact on the consumers that it also brought out bad publicity for the Tango product. The structure of the advert was three men on the street and one of them is drinking an orange Tango. A voice-over of two men who commentate on the man drinking the Tango, reverse to when he takes his first sip. When the two men commentate their tone of voice is an ironic tone of voice. When the man takes his first sip a fat, bald orange man appears to be running in a comical way. ...read more.

From the time of production to the time it went off air the Tango slap advert was a good idea. It was showing that their product had the effect of hitting the consumer with their orangey tangy flavour. To show us that the taste would suddenly hit you. In today's world of advertising and promoting, adverts are important. Companies need to find fun ways, not only to keep the audience interested in it but to actually want to go out and buy their product and tell their peers about the product. Even though when people drank Tango at the time, every one knew that when they consumed the drink that a fat orange man would creep up behind and slap their face, because he never needed to, the figurative slap in the face was from the taste of the actual product. Looking back at when the advert was launched and compared to the other advert at the time, the Tango advert was ahead by miles. It looked at everyday situations and used the situations to influence the consumer. The Art of Persuasion- Reference Page Books The basics of semiotics- Daniel Chandler 2002 Persuasive Communication- James B. Stiff 2003 Lecture Notes Rhetorical Tropes 2007 Semester 2 Week 1 Semantics 2007 Semester 2 Week 2 Semiotics 2007 Semester 2 week 3 Websites http://www.youtube.com/watch?v=ngg9QxNEYn0 www.knowgramming.com www.answers.co.uk www.putlearningfirst.com 1 ...read more.