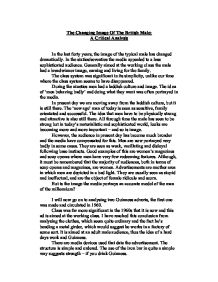 The Changing Image Of The British Male: A Critical Analysis

The Changing Image Of The British Male: A Critical Analysis In the last forty years, the image of the typical male has changed dramatically. In the sixties/seventies the media appealed to a less sophisticated audience. Generally aimed at the working class the male had a breadwinner image, earning and living for the family. The class system was significant in its simplicity, unlike our time where the class system seems to have disappeared. During the nineties men had a laddish culture and image. The idea of 'men behaving badly' and doing what they want was often portrayed in the media. In present day we are moving away from the laddish culture, but it is still there. The 'new age' man of today is seen as sensitive, family orientated and successful. The idea that men have to be physically strong and attractive is also still there. All through time the male has seen to be strong but in today's materialistic and sophisticated world, looks are becoming more and more important - and so is image. However, the audience in present day has become much broader and the media have compensated for this. Men are now portrayed very badly in some cases. They are seen as weak, vacillating and disloyal following base instincts. Good examples of this are women's magazines and soap operas where men have very few redeeming features. Although, it must be remembered that the majority of audiences, both in terms of soap operas and magazines, are women. ...read more.

He is a womaniser who uses his witty charm to his advantage. His character is that of a risk taker who really doesn't care about much, apart from maintaining his rather outrageous and ridiculous image, which many men aspire to and are jealous of. To prove that the ingredients for Bond have remained the same, I will compare Goldfinger (1964) with The World Is Not Enough (1999), Goldfinger opens with Bond swimming to shore with a duck on his head. This is typical British Humour. He then knocks out a guard and plants a b**b. It goes to an exotic bar where we see Bond womanising and there is a fight sequence, he uses innuendos such as "shocking" and humour to make it all lighthearted and less serious than it really is. It then goes to Miami, very glamorous with Big Band music playing and lots of women in bikinis. We are introduced to the Villain. There is a fade out from Miami to London - music picks up. Bond flirts with Moneypenny and there is a very lengthy briefing scene explaining everything at once. The meeting is crafted for people who don't know what the plot is, it is formal and darker shots are used. English accents are used in the meeting. It then goes to the gadget scene with Q. 4 The World Is Not Enough starts in an exotic location with Bond eyeing up an attractive woman. ...read more.

The male image has become so much more complex yet the new Bond movie is currently in production and will no doubt be a huge box office success. 6 In conclusion I would say that the Bond movies are so successful because males dream of being Bond and females dream of being with Bond. Obviously there are other reasons for Bonds success. The films are always the cutting edge in terms of adventure films with innovative action sequences and original story lines. And the sometimes-hilarious British sense of humour that seeps through in the films helps to keep the films interesting and fun to watch, even if they are 40 years old. He is an exceptional character who lives a dangerous and exciting life that is never boring. The world that Bond lives in seems care free and unproblematic in terms of what we have to deal with e.g. financial problems and I think that we all dream about living in it. Bond follows base instinct and he is the kind of person who wouldn't fit in at present day but for some reason men aspire to be like him and women are attracted to him. I think it is because James Bond is exceptional; he is the perfect male who doesn't have to worry about anything apart from staying alive - which we all have to worry about. If you are Bond or are with Bond you're promised an action packed and care free life. By Jack Higgs 10K ...read more.