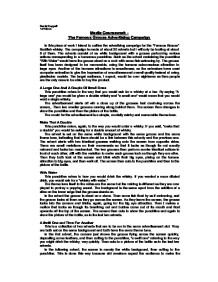 Daniel Heppell 13/7/2004 Media Coursework - The Famous Grouse Advertising Campaign In this piece of work I intend to outline the advertising campaign for the "Famous Grouse" Scottish whisky. The campaign is made of about 20 adverts but I will only be looking at about 6 of them. The adverts consist of as white background with a grouse performing various actions corresponding to a humorous punchline. Such as the advert containing the punchline "With Water" would have the grouse stood on a rock with some fish swimming by. The grouse itself has been designed to be memorable, using the humans sub-conscious attraction to large eyes. Another of the humans attractions is smoothness, so the animators have used computer animation to give the impression of smoothness and overall quality instead of using plastiscine models. The target audience, I expect, would be over eighteens as thes people are the only ones to be able to buy the product. A Large One And A Couple Of Small Ones This punchline refers to the way that you would ask for a whisky at a bar. By saying "A large one" you would be given a double whisky and "a small one" would mean that you would want a single whisky. The advertisement starts off wih a close up of the grouses feet crashuing across the screen,. ...read more.

The screen then cuts to show the punchline and again to show the picture of the bottle, as in the last two adverts. A Swift One and Time For Another This is a collection of two adverts that are to be run in the same advertisement slot. They are both set on the same background and both have the same theme tune. In the first advert, the camera just shows the grouse flying across the screen quickly, depositing some feathers, and then cutting to the punchline, "a swift one" referring to the way you might drink the whisky, very quickly. Then cuts to a picture of the bottle as in the last few adverts. In the following advert, the screen is merely the white backgound, then cutting to the punchline. This is done this way because eht emakers expect the audience to make the connection between the first and second adverts, seeing as though they are in the same advert sequence. This advert is meant to be played when there might be an occasion where drinking is not uncommon for example during half time of a football match. The makers exopect the people in the pub may be watching this advertisement, and therefore might want to buy a quick drink during the half time period, hence the first punchline "A Swift One". ...read more.

This would have been because, to feature the scottish rugby team in an advertisement would need their endorsement. In the advert, the theme tune has changed to the scottish national anthem for the most part of the action until the end where it changes back. The action sequence is very simple. On the screen to start off with is just a rugby ball. Then the grouses tail pokes out from behind the ball. It does this slowly, until it comes to the grouses head, where it pulls out quickly and blinks at the camera. At this point, the music changes to the Famous Grouse theme tune. The screen cuts to show the punchline and then to a different screen where there is the scottish rugby logo. This advert would have been aimed towards the scottish rugby fans, or all rugby dfans seeing as there is a prestigious name is on the advert. Conclusion In conclusion, I found that the advertising campaign was successful in elling the product. The advert has a catchy theme tune, it is very simple and memorable, and it is also amusing, adding to the memorability. The audience this advert is directed at is the kind of person who would be able to buy the product for example rugby fans, or people who class themselves as laid back. It also incorporates the circumstances in which somebody might be watching the advertisement using the Swift One and Time For Another adverts that might be played during the same advertisement interval. ...read more.