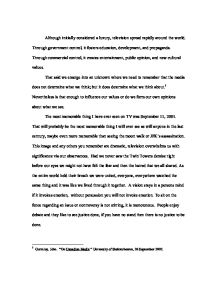 The Growth of Television

Although initially considered a luxury, television spread rapidly around the world. Through government control, it fosters education, development, and propaganda. Through commercial control, it creates entertainment, public opinion, and new cultural values. That said we emerge into an unknown where we need to remember that the media does not determine what we think; but it does determine what we think about.1 Nevertheless is that enough to influence our values or do we form our own opinions about what we see. The most memorable thing I have ever seen on TV was September 11, 2001. That will probably be the most memorable thing I will ever see as will anyone in the last century, maybe even more memorable than seeing the moon walk or JFK's assassination. This image and any others you remember are dramatic, television overwhelms us with significance via our observances. Had we never saw the Twin Towers demise right before our eyes we might not have felt the fear and then the hatred that we all shared. As the entire world held their breath we were united, everyone, everywhere watched the same thing and it was like we lived through it together. A vision stays in a persons mind if it invokes emotion, without persuasion you will not invoke emotion. ...read more.

And while the substance of his remarks were vindicated, Quayle's shot at television is still regarded by liberals as laughable because, after all, "It's only a TV show." Neilson Media Research says that the average person watches TV 28 hours a week, or 4 hours a day. There is some television watching going on somewhere in the average household for 7 hours and 12 minute a day. How can this much TV viewing, this much influx of ideas and values, not have an influence? When liberals aren't talking about how TV doesn't influence, they inadvertently make a good case for how TV does influence society when they talk about other topics. Hillary Clinton has referred to the phenomenon known as the Big Lie; if you hear something told to you enough times over a long enough period of time, especially without much dissent, you start tending to believe it. TV is rife with liberal values, from premarital sex and sex outside of marriage, to the "evils" of authority, to the radical feminist agenda. They are presented as good and positive over and over again, while counter examples are few and far between. Hillary was attacking conservative radio when she mentioned the Big Lie, and how it's influence can be far-reaching. ...read more.

And what are they teaching children about conflict and difficulty? What does it do to children who become conditioned to seeing problems resolved in 30 or 60 minutes? Do they not develop a low tolerance for the frustrations involved in solving problems of any real stature. As the traditional opportunities for expressing love within the family are being consumed by the television, children are losing the opportunity to explore and develop human relationships and values. Children are no longer learning through love expressed in everyday participation in family life so that they can grow to understand what the gift of human life truly is. So in the end how do we think of television? It has opened us up to all sorts of places and cultures. It entertains us, and it is a common community that we share with millions of others, when we are so inclined to participate. I believe that overall it is more detrimental to society than productive. It's made us soft and lazy, unable to create our own forms of entertainment. What passes for news is a dangerous presentment of the world, skewed to make us think it's a grievous, threatening, insane, and horrible place. It brings out the worst in us, as it forces us to become viewers in what amounts to little more than a nightly body count of murders and horrific accidents, we're just too overwhelmed. Television has inevitably replaced life with lifestyle. ...read more.