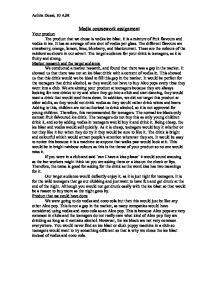 The product that we chose is vodka ice blast - Discussing market research and target audience.

Media coursework assignment Your product The product that we chose is vodka ice blast. It is a mixture of fruit flavours and vodka in ice. It has an average of one shot of vodka per glass. The different flavours are strawberry, orange, lemon, lime, blueberry, and blackcurrant. These are the colours of the rainbow as shown in our advert. The target audience for your drink is teenagers, as it is fruity and strong. Market research and the target audience We conducted a market research, and found that there was a gap in the market. It showed us that there was not an ice blast drink with a content of vodka in. This showed us that this drink would we be ideal to fill this gap in the market. It would be perfect for the teenagers that drink alcohol, as they would not have to buy Alco pops every time they went into a club. We are aiming your product at teenagers because they are always looking for new drinks to try and when they go into a club and start dancing, they would want a drink that would cool them down. In addition, we did not target this product at older adults, as they would not drink vodka as they would rather drink wines and beers. ...read more.

This is because Alco pops are very common in clubs and the teenagers do not really care what kind of Alco pop they are drinking as long as it contains alcohol. However, the ice blasts are not very common everywhere. You would never find an ice blast or slush puppy machine in a club so teenagers would want to try something different so that is why we chose the ice blast instead of vodka and coco cola. Advert There is a large rainbow in the middle of the advert, which signifies a bright, fun mood. This is the focal point of the page as it is the showing the mood of the drink. We chose this, as it is the actual colours in the drink. The reason why we had it as the rainbow coloured drink is that the target audience is teenagers so they would like fruity drinks as well as vodka init. The advert also has signs relating to the drink e.g. sexy, rebel, we music. There is a symbol used here as teenagers look at symbols instead of words. It is better to put a love heart on our advert instead of the actual word 'love'. This signifies that this drink is for partying & clubbing, as it has to do with music. ...read more.

We could do this in the main town centre on a weekend, as this is when most teenagers come into town. On the handouts, you would put the name of the drink, the available flavours and places you would be able to find the product. You could also put posters up with a large picture of the drink in the middle and the name and details of the product underneath. This would attract many teenagers to look at the posters. You could advertise it on girl's magazines. This would be just after the beauty and fashion section of the magazine as this is where most girls look. This would attract teenage girls. Lastly you could do a television advertise where there is a gang of teenage girls and boys are going out clubbing and they order the 'kiss' drink and at the end one of the girls could get a kiss off the barman. Then a narrator would say 'go on try it you could be lucky one day'. Meaning if you ask for a 'kiss' you could get on off the barman. This would be great for the target audience, which are teenage girls as they like going out and getting kisses of boys. Therefore, this would be a good enough reason to get one. Words-1321 Achita Desai, 10 AJH ...read more.