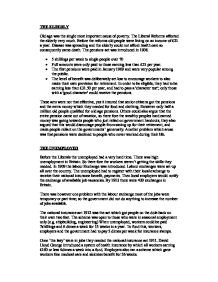 The reforms of the Liberals

THE ELDERLY Old age was the single most important cause of poverty. The Liberal Reforms affected the elderly very much. Before the reforms old people were living on an income of �21 a year. Disease was spreading and the elderly could not afford health care so consequently came death. The pensions act was introduced in 1908. * 5 shillings per week to single people over 70 * Full amounts were only paid to those earning less than �21 per year. * The first pensions were paid in January 1909 and were very popular among the public. * The level of benefit was deliberately set low to encourage workers to also make their own provision for retirement. In order to be eligible, they had to be earning less than �31.50 per year, and had to pass a 'character test'; only those with a 'good character' could receive the pensions. These acts were not that effective, yes it insured that senior citizens got the pensions and the extra money which they needed for food and clothing. ...read more.

Once 'the lazy' were in jobs they needed the national insurance act 1911. David Lloyd George introduced a system of health insurance by which all workers earning �160 or less 4dimes a week into a fund. Employers also ran a scheme which gave workers free medical care and sickness benefit for 26 weeks. The labour exchange and the insurance act 1912 did really help the unemployed by giving them money and getting them back into jobs. Opponents did argue that giving them money whilst their not working is a bad idea and that it will make them lazier. However, by introducing the labour exchange the unemployed were able to get back working and thus getting the skills which they needed to progress in life. There was however one or two problems with the unemployment insurance, it only covered jobs which were in seasonal labour. The other problem was that the national insurance covered about 14 million people, but only applied to those on low incomes or those who made contributions-not their families. ...read more.

They helped children get food, limited their working hours and placed necessary restrictions. To help improve the economy the unemployed needed to be helped, they were put in jobs, given money so therefore the poverty line decreased. The elderly were also given pensions. On the other hand, it can be seen that the reforms were not that effective. There were problems which with all three reforms. With the elderly the pensions were taken out of taxation. So the rich and wealthy argued that their hard earned money was going towards the lazy. The childrens free school meals did not really work for the reason that it was not compulsory, thus some councils did not provide meals. Then we can see the problem with unemployment. The labour exchanges was set up to get people into jobs, however the jobs were only part-time and some temporary, the government did not actually increase the number of jobs available. So by understanding both points of view it can be seen the liberals did not help the old, the unemployed and the elderly really effectively. Yes, they did introduce acts, however there were more down sides than advantages for each reform. ...read more.