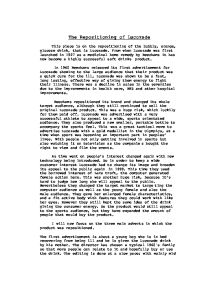 The Repositioning of Lucozade

The Repositioning of Lucozade This piece is on the repositioning of the bubbly, orange, glucose drink, that is Lucozade. From when Lucozade was first launched in 1927 as a medicinal home remedy by Beechams it has now become a highly successful soft drinks product. In 1960 Beechams released its first advertisement for Lucozade showing to the large audience that their product was a quick cure for the ill, Lucozade was shown to be a fast, long lasting, effective way of giving them energy to fight their illness. There was a decline in sales in the seventies due to the improvements in health care, NHS and other hospital improvements. Beechams repositioned its brand and changed its whole target audience, although they still continued to sell the original Lucozade product. This was a huge risk, which luckily for them paid off. Lucozade was advertised with a very successful athlete to appeal to a wide, sports orientated audience. They also produced a new smaller, portable bottle to accompany the sports feel. This was a great tactical move to advertise Lucozade with a gold medallist in the Olympics, at a time when sport was becoming an important part in peoples' lives. With people not only getting involved in sports but also watching it on television as the companies bought the right to view and film the events. As time went on people's interest changed again with new technology being introduced. ...read more.

The written slogan reinforces what the narrator says. It is shown at the end and is a clear, snappy and memorable statement, which repeats the word "Aid" ("Lucozade Aids Recovery") to achieve this. This makes it sound like a fact. The second advertisement was shown during 1980. It features Daley Thompson, the Olympic decathlon champion, who is shown growing tired during a training session. He drinks Lucozade, which refreshes him and gives him the energy to start running again. The celebrity, Daley Thompson is used to endorse Lucozade because he was very popular at the time. He was the Olympic Decathlon champion, and Lucozade wanted to be associated with his success. In doing this Lucozade changed its image and expanded its target audience to the sporting youth market. This is evident in many places: The music used is a heavy metal style, which was popular with teenagers at the time. The nature of the music is loud and at a motivating pace, which builds up to a point (when the traffic light goes green). Because of this nature of loud and rhythmic music the listener will hear and associate the music with the brand, and the brand with the product making the product better known. The bottle shape has also changed, although the old large bottle is still on sale. ...read more.

Throughout the advert, Lara's energy bar is displayed at the top of the screen, just like in the game. When Lara drinks the Lucozade the energy bar moves from almost empty to full, which shows how energizing Lucozade really is. The bottle has changed to a more streamline shape with the brand name adopting the same streamline shape of the bottle. There is also a soundtrack to this advert, which is very distorted; there are no patterns or rhythms to it. This adds to the overall scene of danger and rapid movements as she tries to get away from the wolves. When Lara slams the Lucozade in front of the camera she is saying that it is one of her most useful things in her Tomb Raiding adventures and she doesn't know where she would be without it and is inviting you to try it and buy it too. Overall I think the adverts have been incredibly successful at achieving what they set out to do. They have produced very griping adverts that make the viewer watch with interest and awe. Each advertisement has captured the feel and trend of that particular moment in time. Making the audience want to buy the product to help them in their lives, whether they are performing sport, recovering from illness or escaping from some extreme and challenging situation! ...read more.