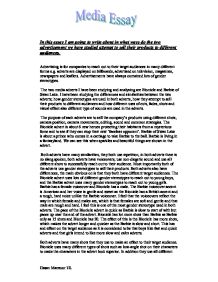 In this essay I am going to write about in what ways do the two advertisement we have studied attempt to sell their products to different audiences. Advertising is for companies to reach out to their target audiences in many different forms e.g. adverts are displayed on billboards, advertised on television, magazines, newspapers and leaflets. Advertisements have always contained lots of gender stereotypes. The two media adverts I have been studying and analysing are Bionicle and Barbie of Swan Lake. I have been studying the differences and similarities between the two adverts; how gender stereotypes are used in both adverts, how they attempt to sell their products to different audiences and how different uses of cuts, fades, shots and visual effect also different type of sounds are used in the adverts. The purpose of each adverts are to sell the company's products using different shots, camera position, camera movements, editing, sound and common strategies. The Bionicle advert is about 6 new heroes protecting their habitants from a mysterious force and to see if they can stop their new 'faceless opponent'. Barbie of Swan Lake is about a prince who comes in a carriage to take Barbie to the ball. Barbie is living in a fantasyland. We can see this when sparkles and beautiful things are shown in the advert. Both adverts have many similarities, they both use repetition, in both adverts there is no slang spoken, both adverts have voiceovers, use non-diegetic sound and use all different shots to successfully reach out to their audience. Most importantly both of the adverts use gender stereotypes to sell their products. ...read more.

that fades and dissolves make the advert slow and smooth which girls like and use of cuts and continuous editing makes it fast which boys like. Sound is another important part of selling a product because it reinforces the advertisers message. In the adverts I have studied, very little diegetic sound is used. In the Bionicle advert the only diegetic sound you can hear is the fast movement of the action figures, e.g. flying/running and this is to suit the energetic behaviour of boys and to show you what skill the figures have. However, the Barbie advert uses trickling water sounds, this is for a different affect. Many people believe the sound of trickling water to be tranquil and calming so by putting it at the beginning of the advert it sets the appropriate tone for there audience. In the two adverts both non-diegetic and diegetic sound is used. In both commercials non-diegetic sound is used, as the voiceover is the same gender as the target audience. The Bionicle voiceover is male and the sound of the voiceover is loud and pace of the voice is quick. Same technique is used in the Barbie advert, the voiceover is female and the sound of the voice is soft and gentle. I think the purpose for this is it has better effect to sell their product to their target audience, as Merris Griffiths wrote in her article under Auditory features. "A male spoken dialogue normally occurs in those advertisements most specifically aimed at boys and a female narrative (both spoken and sang) ...read more.