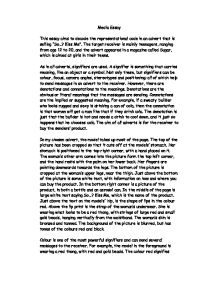 This essay aims to decode the representational code in an advert that is selling &quot;So&amp;#133;? Kiss Me&quot;. The target receiver is mainly teenagers, ranging from age 12 to 20, and the advert appeared in a magazine called Sugar.

Media Essay This essay aims to decode the representational code in an advert that is selling "So...? Kiss Me". The target receiver is mainly teenagers, ranging from age 12 to 20, and the advert appeared in a magazine called Sugar, which is aimed at girls in their teens. As in all adverts, signifiers are used. A signifier is something that carries meaning, like an object or a symbol. Not only these, but signifiers can be colour, focus, camera angles, stereotypes and positioning; all of which help to send messages in an advert to the receiver. However, there are denotations and connotations to the meanings. Denotations are the obvious or literal meanings that the messages are sending. Connotations are the implied or suggested meaning. For example, if a sweaty builder who looks rugged and sexy is drinking a can of cola, then the connotation is that women will get a man like that if they drink cola. The denotation is just that the builder is hot and needs a drink to cool down, and it just so happens that he chooses cola. The aim of all adverts is for the receiver to buy the senders' product. In my chosen advert, the model takes up most of the page. The top of the picture has been cropped so that it cuts off at the models' stomach. ...read more.

This is because the anchor is printed right across it in the middle, and so it is the main focal point in the picture. The model takes up nearly all of the page. She is facing sideways in the picture. This could be seen as s****l, as she is showing part of her body but not all of it. Picture can be taken from all different angles. In my advert, the picture is taken from below slightly. This is to give it a bigger surface area for the advert. The connotation to this is that whoever left the 'kiss mark' on the model's hip is down at that level. The model's head is not in the shot, so there are no facial expressions. Not only the angle but the focus that is used can say many things about an advert. It is quite a soft focus in the picture that I chose. The sender does not want it to be too overpowering, so a soft focus is used to make is aesthetically pleasing to look at. The background to the picture is blurred. The denotation to this is to shield whatever is there, and also make sure that the receiver only looks at the main picture. The connotation of this is a bit s****l, especially as the colours are red and black. It makes the receiver wonder what is behind the model as well. The soft focus gives a gentle feel to the advert. ...read more.

The advert uses the signified of passion, l**t love and danger in the woman's red thong, to suggest that you will have a lifestyle like that. The lighting to emphasise the woman's skin, and that fact that the picture is cropped just below the woman's bust, helps to sell the product. This is because it is appealing to men (who would buy the product in hope that if their wife/girlfriend used the product then they would look like the model) and also to women who may want a figure like the model's. It also uses the signified if impurity and danger in the black and red background, and the soft focus gives an intriguing feel to the picture. In complete contrast to the black and red background, the anchor is printed in white, which signifies purity, virginal and innocence. The 'lip mark' which suggests that a woman kissed the model, adds a s****l feel to the advert, along with all of the colours that have been used, and the phallic symbol of the aerosol can. The model's hands are cleverly placed so that they are pointing towards the anchor of the product, which happens to be in the middle of the page; the first place that the receiver will look. The faint shape of a triangle, in which the model is standing, signifies power. To conclude, I think that this advert works well in today's society, and that it would be very successful in selling the product to both men and women, as it catches the attention of both sexes. ...read more.